What happens when an actor living in New York is inspired by the current social conflicts of Jamaica? The answer is Excuses For Jeff, a film written, produced and starring 27 year-old Gibrey Allen.

In the gut wrenching Excuses For Jeff, Allen tackles the controversial and taboo topic of homophobia in Jamaica. With his portrayal of multiple characters, the talented New Yorker creates a story reminiscent of The Laramie Project, only it hits closer to home as a group of friends explain their reasons for not attending their best friends funeral.

But let’s start from the beginning—how did Allen actually get into acting? The Jamaican born actor explains that he traveled back and forth between the island and the states and had originally wanted to fly planes, until a childhood friend influenced his career choice. “ When I was really young the teacher asked us what we wanted to do. A friend stood up and said he wanted to be an actor, and I thought it was fascinating that you could portray different characters.” 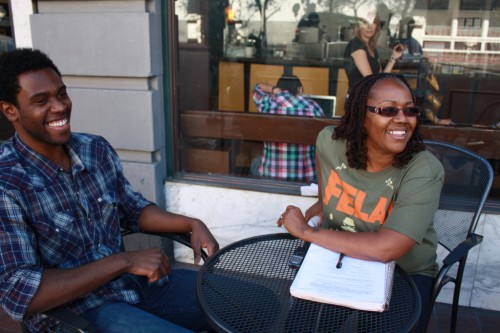 Despite not having any formal training, Allen is a firm advocate of the Meisner technique—as he believes that the imagination is infinite.  Because the method encourages emotional recollection and creation, it was natural for Allen to adapt to the acting style. Idolizing Jeffrey Wright, Denzel Washington and Morgan Freeman, Allen found inspiration in their abilities to fully embody the characters they portrayed.

As Allen delved further into acting, he thrived in creating multiple characters and his interest in film development skyrocketed, Allen smiles, “It’s so much more fulfilling when you create it yourself.” He wanted to see more stories that he could relate to on film and the big screen, and thus, Excuses For Jeff  was constructed.  The fictional movie was sparked after Allen had a conversation with his brother regarding homophobia in Jamaica. Although these vicious hate crimes are not covered often in America, it is still an issue that affects the collective social problems of the world. It took all of six months for the film to be completed and Allen even went on location to Jamaica to fully capture the essence of the culture, story and characters.

Excuses For Jeff does not accept homophobia in Jamaica, but rather asks, why haven’t we done anything to stop it? Allen’s various answers are clear in the dialogue between Jeff’s best friends and brother, as the characters Ryan, Travis, Miles, Shawn and Mike tearfully justify their actions.

Although each character is an extension of Allen, he found that he related closest to the character Mike, Jeff’s brother. Allen, being enraged by the callous attitudes on hate crimes in Jamaica, strongly connects with Mike as they share similar views on the way Jeff died. Allen passionately clarifies, “I found myself going off and it was hard sticking to script, because I would ramble about what I really felt.”

Allen suggests that in part with cultural and traditional opinions, in reality—the force spearheading homophobia in Jamaica is the music. From dancehall DJ’s to popular musicians, these artists are extreme about their hate filled principles and when these lyrics are combined with a good beat, the youth embrace the violent lifestyle and put the words to action.

With hostile opinions still occurring in Jamaica, Allen won’t screen the movie there yet for safety reasons but he hopes that by screening it in the states, enough awareness will motivate people to ignite a change. While in the development stages of Excuses For Jeff, Allen’s perspective on the story was further enhanced, and he strongly believes that love is love, and that everyone should be treated equally with respect and compassion, despite their orientation.

We at The Chocolate Voice were honored to be able to watch the heartrending film at the San Diego Black Film Festival, and we fully encourage everyone to view it, as we are certain that anyone can sympathize with the characters rationales as they remember a lost friend.

As for the talented Allen, we look forward to seeing his next project soon and we’re keeping our fingers crossed that he wins an Oscar in the near future.

For more information on Allen and Excuses For Jeff, please visit imdb.com and FACEBOOK/COM/EXCUSESFORJEFF