Disney Takes the Fear Out of Going to the Doctor in New Animated Series: “DOC MCSTUFFINS.”

At a screening held on Tuesday, March 21 at ABC TV Studios, The Chocolate Voice was on hand to interview some of the talented cast members  and producers of Disney Junior’s new animated series “Doc McStuffins.”  When asked the question, ‘Do you like going to the doctor?’ The spunky 13 year old voice over actress Kiara Muhammad answered quickly, “Who does?”  She continues her quick, witty comeback with, “ I don’t know of anyone who would say, ‘Hey guys let’s all jump in the car and go to the Doctor!’” Muhammad shares that she and her siblings are athletic and spent hours at the doctor’s office as a result of injuries and says that it was no fun.

A confident straight “A” student originally from Boston, Massachusetts, Muhammad voices the title role of Doc McStuffins, a six year old girl who runs and operates a clinic for stuffed animals and toys, offering healthy tips making trips to the doctor less scary.

Muhammad’s family relocated to New York when she was just seven and headed for Los Angeles after realizing the gift for acting in their young daughter.  Other TV and film credits for the bright eyed teen include: Disney’s “Hannah Montana,” “Curb Your Enthusiasm” and “Mike and Molly,” just to name a few.  Muhammad says, “I hope that the show sets out to do what it’s meant to do: educate and take the fear out of going to the doctor.”  She goes on to say, “We’re hoping to get First Lady Michelle Obama on board as a guest star to promote healthy living to kids.” 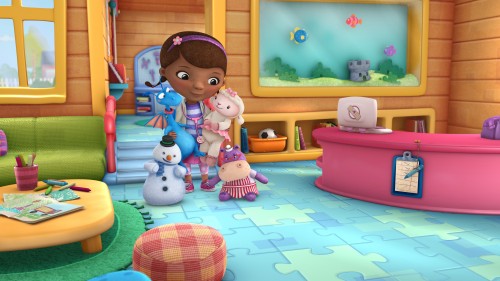 Creator and Executive Producer and Emmy Award-winning writer Chris Nee was inspired to create a series based on her own experience as a mother to her young son Theo’s anxiety about going to the pediatrician as a result of severe asthma. As a writer, Nee’s goal is to create a show which makes going to the doctor less stressful for both kids and parents.

Nee won an Emmy in 2002 for her work on “Little Bill,” the Peabody Award-winning series based the children’s book by Bill Cosby.

Sandra de Castro Buffington, Director of Hollywood Health & Society, a program of the USC Annenberg Norman Lear Center, served as a resource to Disney Junior for the health related storyline.

What viewers will find most appealing about the original series aimed at audiences 2-7, is its share of diversity in characters.  Most notable is the portrayal of families in non traditional roles as in the case of Doc’s Mom/ Mom McStuffins, voiced by the talented Los Angeles native and 18 year voice over veteran Kimberly Brooks.  Mom McStuffins plays a  professional working African American mom and doctor who is always on hand to consult with her daughter on a diagnosis, while Dad is shown contributing to the household duties.

Brooks, who is a graduate of Cal State Long Beach and founder of the cutting edge Elephant Theatre in Hollywood, says, “I’m very excited to be a part of a series promoting positive, diverse images across the board.”

Nine-year-old Jaden Betts voices the role of Doc’s energetic little brother Donny McStuffins.  When asked about how he feels about going to the doctor, adorable Betts says frankly, “I don’t like shots.”  Acting since the age of five months, Betts got his start when he was cast in a Spike Lee directed national commercial for State Farm, and was most recently seen on the big screen playing Cedric the Entertainer’s son in “Larry Crowne,” directed by Tom Hanks.

Other dynamic voice actors in the animated series include: veterans Robbie Rist as the voice of Stuffy the dragon.  Rist began his acting career at the age of 6, playing Cousin Oliver on the iconic “Brady Bunch.”

Emmy Award-nominated  and well rounded entertainer, Jess Harnell  is the voice of Chilly, a stuffed snowman who spends plenty of time in the Doc’s office.  Jess was the only voice actor to portray two characters in “Transformers” (2007). An accomplished singer, Harnell served as the lead singer of 80’s metal band, “Rock Sugar” and has shared the stage with rock legends Slash and Aerosmith.

Other recognizable voices include, Emmy and NAACP Image-award winning actress Loretta Devine as the voice of Hallie. 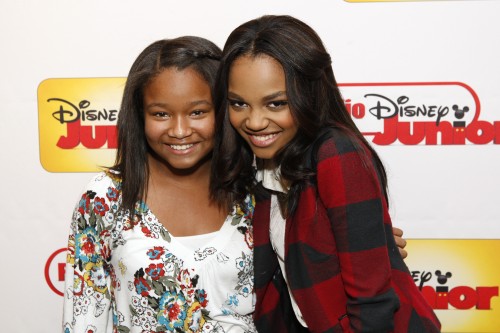