On every 2nd and 4th Sunday of the month, the San Diego House of Blues hosts its high energy, mouthwatering, show-stopping Gospel brunch.

Come on, who doesn’t enjoy the sweet, magnetic sound of Gospel music coupled with a hearty meal of bacon, biscuits and gravy, southern fried chicken, red beans and rice, macaroni and cheese, breakfast potatoes and our personal favorite, banana bread pudding? Now, after reading that menu—everyone better be ready to praise the Lord and pass the biscuits!

Along with their food, The House of Blues is known for bringing some of the hottest artists from around the world to perform—and San Diego is lucky enough to have one of our own Gospel acts at every performance—Eddie Baltrip and Fulfullment. Although they previously performed at the Los Angeles House of Blues, Baltrip and company were so good that the San Diego House of Blues offered them a contract in their own house— in their own city, and as fellow San Diegans, we are more than proud. 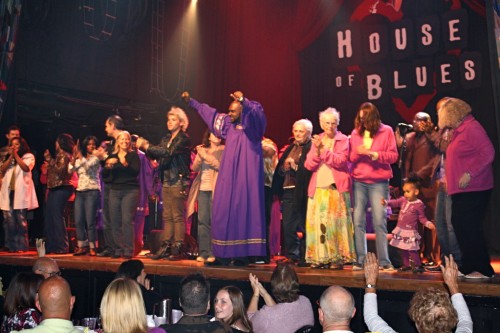 The Chocolate Voice recently attended the vivacious Gospel brunch, and the choir’s energetic performance was quite the morning workout!  Although set in a cozy dining area leaving minimal elbow room, the space is artistically surrounded by pictures of blues musicians like B.B. King  and Lightnin’ Hopkins and, completes itself with foot-stomping, spirit-driven Gospel music.

The melodic crew entertained the crowd with their stunning vocal ranges by singing traditional Gospel favorites, and creating their own rendition of the birthday song, in which they coined, “Happy Birthday-Anniversary-Out of Town Guest, to You”. As they got the audience members up on their feet to join in song and praise, fans of all ages livened up the house even more with their enthusiastic dancing.

As the show wrapped up, the harmonious music surrounded the entire venue and every audience member left feeling moved by the spirit. What better way to spend a Sunday morning than a hearty meal, and a phenomenal performance at the San Diego House of Blues. 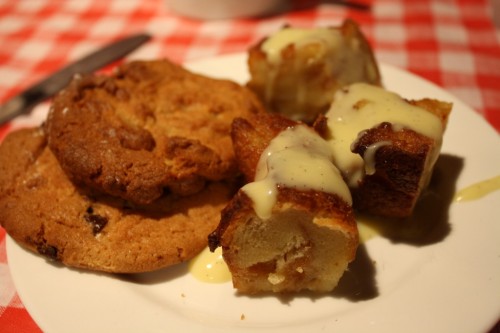