Via Press Release/Carlsbad, CA (December 3, 2012) – The opening of the 2013 NAMM Show on January 24, 2013 marks not only the start of the world’s premier gathering for the music instrument and product industry, but also the debut of the Anaheim Convention Center’s new outdoor venue, The Anaheim Grand Plaza.  To make full use of the Grand Plaza, NAMM has booked four jam-packed days of live music, tributes, events and networking opportunities in the new, outdoor space..

The new Anaheim Convention Center Grand Plaza runs between the Hilton and Marriott leading to the main entrance of the center. It features 100,000 square feet of outdoor meeting and event space and during the NAMM Show an outdoor stage for live performances. The new plaza paired with an expansion of the NAMM Show perimeter to the outer glass doors of the convention center will add a significant amount of new space for show attendees to enjoy. An expanded show floor, also means fewer badge check points once at the show in addition to new features including a NAMM Member center, Digital Hub and First Look product showcases in the lobby.

Following the ribbon cutting, the 1st Marine Division Band from Camp Pendleton will perform on the plaza. The 50-piece band will then enter the Anaheim Convention Center to march through the aisles, serenading show-goers with “The Star-Spangled Banner” and other patriotic songs.

The first day culminates with Tower of Power performing live on the plaza. Tower of Power has been playing together since the late 1960s when they, alongside such legendary bands as Santana, the Grateful Dead and Jefferson Airplane, helped to define “The San Francisco Sound.” Known for their soulful urban vibe and powerful horn section, Tower of Power will perform their greatest hits to celebrate a busy day of business at the NAMM Show. 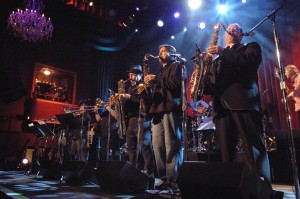 The NAMM Show gathers 90,000 members of the music product industry from around the world to preview new product debuts from more than 4000 of brands across every category. Registration is now open for qualified members of the music instrument, product and pro-light and sound industries. Exhibit space is still available for the 2013 event. Learn more about the 2013 NAMM Show at http://www.namm.org/thenammshow/2013.

The National Association of Music Merchants (NAMM) is the not-for-profit association with a mission to strengthen the $17 billion music products industry and promote the pleasures and benefits of making music. NAMM’s activities and programs are designed to promote music making to people of all ages. NAMM is comprised of approximately 9,000 Member companies located in more than 87 countries. For more information about NAMM or the proven benefits of making music, interested parties can visit www.namm.org, call 800-767-NAMM (6266) or follow the organization on Facebook, Twitter and YouTube.