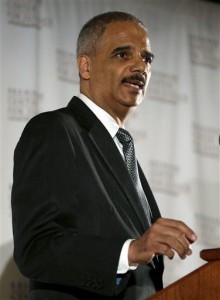 Eric Holder, the nation’s first black chief prosecutor and one of the few remaining original members of President Obama’s cabinet, announced his resignation today. Holder will remain in office until a successor is nominated and confirmed, Obama said at a brief White House announcement. Standing next to Holder, he called his friend’s departure “bittersweet.”

“I will never leave the work. I will continue to serve,” said Holder, whose nearly six years in the office make him one of the nation’s longest serving attorneys general.

Holder’s departure sets up a potentially tense confirmation battle with Republicans in a lame-duck U.S. Senate session scheduled after the Nov. 4 midterm elections. Republicans hope to gain a Senate majority in the elections, making it likely Obama will send up a nomination before a new Congress convenes in January.

Source: Reuters and The Root.