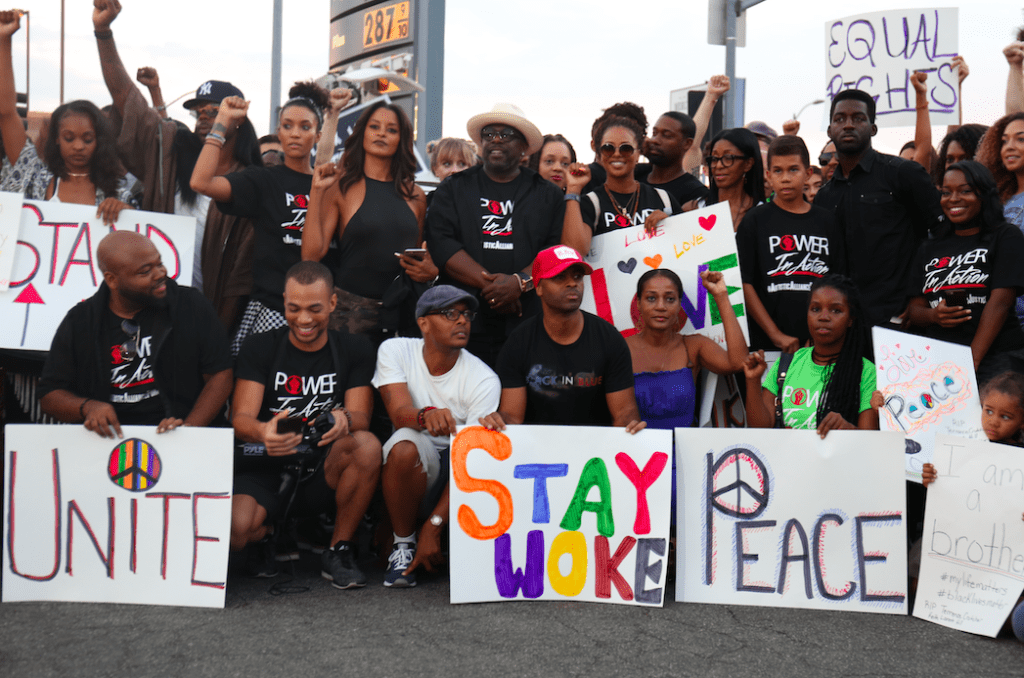 Photo Credit: Isaiah Bankhead
(HOLLYWOOD, CA) –  Black Hollywood is not standing by on the sidelines when it comes to social justice and the continuous murdering of unarmed Black men by local law enforcement agencies. On September 29, they showed up in numbers in front of the CNN building leading the community by storm to stand together in solidarity for social justice.
Legendary comedian, Cedric the Entertainer, led the charge for a call-to-action march & rally for Black Hollywood elite to come together to set an example and educate the community providing actual action items for them to take away [such as registering to vote] and make a change after the recent police inflicted murders of the unarmed Terrence Crutcher, Keith Lamont Hill and Alfred Olango. These efforts were organized by brand strategist Steve Jones, Brand Maverick Entertainment–the same organizer of the panel event series The Hollywood Confidential and gathering celebrities to participate in the previous Los Angeles #OccupyCityHall Movement–and strongly supported by model/actress Eva Marcille (America’s Next Top Model, Born Again Virgin) and actor Kendrick Sampson (How to Get Away With Murder, The Vampire Diaries,) Tina Knowles-Lawson, Meagan Good, DeVon Franklin, Robi Reed, Jim and Monique Brown, Omar and Keisha Epps and Russell Simmons. Additional celebrities in attendance included Kym Whitley, Claudia Jordan, Elise Neal, and Gabrielle Dennis (Fox’s Rosewood.)
At the rally, a newly formed non-profit organization was unveiled as the Artistic Alliance for Justice (AAJ). AAJ’s mission is to utilize their [celebrities and entertainment influencers] collective resources and individual platforms to amplify initiatives that invoke positive social and political change. In remembrance of why everyone gathered, AAJ welcomed the mothers of police inflicted tragedies to take a moment of silence for the loss of their loved ones including the mothers/grandmothers of Wakeisha Wilson (killed Easter Sunday 2016 by LAPD,) Kendrec McDade (Pasadena City College student killed by Pasadena police in 2012,) and Keith Bursey (killed by LAPD in June 2016 while parked at a convenience store.)
AAJ not only rallied together celebrities and the community, but also collaborated with California for Progress (www.californiaforprogress.com), Campaign Zero (JoinCampaignZero.org),  Color of Change (www.colorofchange.org) and Black Lives Matter-Los Angeles (www.blacklivesmatter.co
Scroll to Top