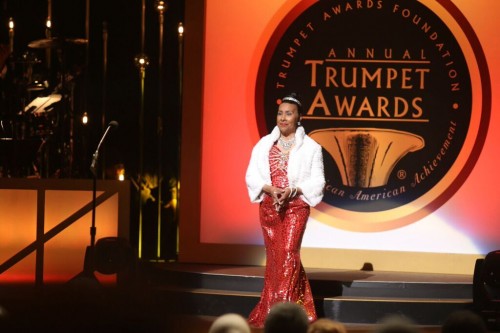 “The Best Man” and ABC sitcom “Uncle Buck” actress Nia Long and “Think Like A Man Too” and “The Perfect Match” star Terrence J hosted the black-tie ceremony, held at the Cobb Energy Performing Arts Centre in Atlanta, Georgia on Saturday, Jan. 23, 2016.

Kicking-off the show was a crowd-pleasing special tribute to the GRAMMY® Award-winning iconic group Salt-N-Pepa, in celebration of their 30-year anniversary in hip-hop. The tribute included a special performance by Salt-N-Pepa, who took the stage to perform their smash hit “Push It,” as well as featured appearances by rappers MC Lyte, Yo-Yo and Monie Love.

Two extraordinary performances of the evening included a soul-stirring rendition of the Adele hit single “Hello” by GRAMMY® Award-nominated singer-songwriter Joe, as well as an emotionally riveting performance by R&B and jazz singer Andra Day, who sang “America the Beautiful” which she sang during a very special tribute to all 18 African American Women of the United States Congress who were honored with the prestigious “Political Leadership Award.”

One of the biggest highlights of the evening was the honoring of comedian and actor George Wallace with the “Legend Award,” and a very special appearance and tribute by Academy® Award-winning actress and comedian Mo’Nique.