WASHINGTON, Sept. 23, 2012 /PRNewswire-USNewswire/ — In celebration of National Voter Registration Day on Tuesday, September 25, The Voter Participation Center joins with Balcony Films for a release of a new music video and original song, “L.O.V.E. (Let One Voice Emerge),” urging women and other unregistered voters to head to the ballot box on November 6. “Let one voice emerge, let your voice be heard” at the voting booth, the song reminds voters. Unmarried women, persons of color and young people – the Rising American Electorate – comprise 53 percent of the voting eligible population, and yet represent 63 percent of all unregistered citizens. 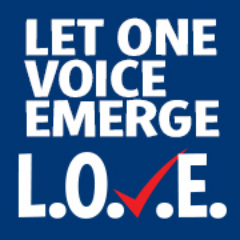 “We felt a music video with incredible star power in recognition of National Voter Registration Day would be an attention-getting way to encourage all eligible Americans to participate in our great democracy,” says Page Gardner, President of the Voter Participation Center. “The message is simple: Get registered and get to the polls on November 6.  Let the voice of one join the voices of millions and be heard.”

Starting on Sunday, September 23, video and other multimedia assets will be available at this link: http://www.lovevoting.org

In developing the project, producer Julie Bergman Sender explained, “We wanted to create an anthem – to show this group of American women how valuable their voices are to the health of our democracy and the power that one voice – each and every voice – really has. L.O.V.E. (Let One Voice Emerge) is our answer to the question ‘Why does my voice matter?'”

The music video directs viewers to a new website, www.LOVEVoting.org, where visitors can view a special message from Dr.Maya Angelou, download the song for free, view outtakes from the recording and alternative versions, and register to vote through the Voter Participation website www.voterparticipation.org. Visitors to the LoveVoting.org site may choose to support the effort by donating to the Voter Participation Center and the song will be available on iTunes, Amazon.com music and other major online music distributors.

“This is our L.O.V.E. song to America,” says L.O.V.E. co-writer and acclaimed vocalist and performer Patti Austin. “When I discovered that nearly 20 million unmarried women don’t vote, I had to do something. So I went to three of the most talented people I know to work with on this. We have never collaborated together before and I couldn’t think of a more auspicious reason to come together.”

About the L.O.V.E. Campaign

“L.O.V.E – Let One Voice Emerge” is a non-partisan campaign to reach out to the largest group of non-voters in America — nearly 20 million unmarried women — and to support the important work of The Voter Participation Center and their partners. The Voter Participation Center’s mission on behalf of the Rising American Electorate (unmarried women, persons of color and young people) is to register and encourage these groups to the polls, which aligns with the goal of our campaign. Built around L.O.V.E, a powerful new song written by some of America’s most beloved singer/songwriters, this effort works to acknowledge that women, especially unmarried women, will be the voters who decide this election.

About the Voter Participation Center

The Voter Participation Center (VPC) is a research-driven, results-oriented nonprofit, nonpartisan organization dedicated to increasing the participation and amplifying the voices of unmarried women (women who are single, widowed, divorced or separated) and other historically underrepresented groups in our democracy. The mission of the VPC is to boost the civic engagement of unmarried women, people of color and 18-29 year olds—the three demographic groups who comprise the Rising American Electorate (RAE). These Americans make up 53 percent of the voting-eligible population and are responsible for 80 percent of the U.S. population growth in the last decade, but were only 42 percent of the 2010 electorate and 47 percent in 2008.