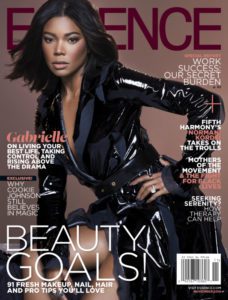 Chocolate beauty Gabrielle Union, star of Birth of a Nation and the upcoming holiday comedy Almost Christmas, looks absolutely delicious on the cover of  Essence.  The star of “Being Mary Jane” is working that #BGM-Black Girl Magic.

In Essence’s November issue cover story, State of the Union, the actress talks about everything from speaking out against sexual assault, life with NBA superstar hubby Dwyane Wade, and worrying about violence against her boys.

“…As a rape survivor and as an advocate, I cannot shy away from this responsibility because the conversation got difficult. I don’t want to put myself above anyone’s pain or triggers. Every victim or survivor, I believe you. I support you. I support you if you don’t want to see the film. I absolutely understand and respect that. I can’t sell the film. This movie has always been about more than one person, and for the outspoken feminist advocates and allies who risked a lot to be a part of this project—Aja Naomi King, Aunjanue Ellis, Penelope Ann Miller—we are okay if you have to sit this one out, and we’re okay if you don’t, and we understand…”— Gabriel Union.

The November issue of Essence hits newsstands this Friday, 10/14.