We’ve all emulated those famous Mu Gamma Xi dance steps from Stomp the Yard, and have mastered the choreography to ‘N Sync’s “Bye, Bye, Bye”. We’ve even shed a tear watching The Express and Showtime’s Soul Food – but what we haven’t done, is get to know the talent behind these memorable projects.

For an Award winning choreographer like Darrin Dewitt Henson, there’s never a dull moment, and the 41 year old is constantly on the move. Considering, he’s worked with some of the biggest names in entertainment, from Michael Jackson to Prince, to Jennifer Lopez, Dennis Quaid and Justin Timberlake – it’s no wonder he stays busy!

Lucky for The Chocolate Voice, the Bronx native made time to talk us about growing up at the height of the hip-hop movement, blacks in film, his new book, Aint That the Truth, and his new film, Black Coffee.

TCV:  Let’s start off by talking about your dance career.  How did you get started in dance?

DH: Coming from the Bronx, I grew up in the middle of the hip hop culture, graffiti, D.J.s, rapping, street dancing, pop locking or break dancing.  I wasn’t a graffiti artist and I wasn’t a rapper, I loved dancing so it was easy for me to cultivate and show my skills, because creativity was literally in my backyard. You know Afrika Bambaataa the Zulu nation used to have the Zulu anniversary jams—five blocks from my house it was apart of my environment that I really enjoyed.

TCV:  We’ve interviewed quite a few New Yorkers and through our conversations there appears to be a strong sense of unity among the entertainers coming from that region, would you agree?

DH:  I do agree! The energy coming from the Bronx continues to expand. I went to DeWitt Clinton High School and I found out that Jimmy Walker, Kevin Kline, Calvin Klein, Tracy Morgan and, Penny Marshall’s brother, Gary Marshall all went to that school. So there’s just a lot of creativity that comes from the Bronx— Jennifer Lopez, Mark Anthony, Kerry Washington, there are so many people who came from the Bronx that are making their mark on the world.

TCV: How has dance changed your life?

DH:  My passion for dancing has granted me the opportunity to work with the top artist in the world, Michael Jackson. Working with Michael and, other top entertainers led to the creation of “Darrin’s Dance Grooves.”  So for me it was “Darrin’s Dance Grooves” that introduced me to the world as a choreographer. I was then able to create dance moves for NSYNC’s “Bye Bye Bye,” Jennifer Lopez’s “Love Don’t Cost a Thing,” Christina Aguilera’s “Genie in a Bottle” and Jagged Edge’s “Where the Party At.” But most notably was NSYNC’s “Bye Bye Bye,” which, I mean the videos went all around the world.  So that is what ultimately changed my life, and led to movies like “Stomp The Yard” with the reinvention of college fraternity stepping.

TCV:  Rachel on Facebook would like to know, as Choreographer, who was your favorite artist to work with?

DH: Michael Jackson. Next was NSYNC— Justin (Timberlake) is doing great! It’s a great feeling when you look at people and see where they’ve gone with their careers. Now we are always going to be connected because of the work that I have done and the awards that we won together, so there’s this kind of interrelated connection that’s just beautiful!

TCV: You’ve had a very accomplished body of work.  Who have you worked with that has had the most impact on your career?

TCV:  Tell us how easy or how difficult it has been for you to transition from a career in dance to TV and film?

DH:  You know it was extremely difficult because I mastered one genre and then acting as a whole, is a completely different animal. And as a choreographer, I had to basically jump into a big ocean with other hungry sharks. It’s never easy being rejected and hearing no, or you’re too tall or too short, or too light, too dark. So you have to master your emotions. I had to develop myself as I did as a choreographer, but it’s never easy. This business is for warriors.

TCV:  Gina from Facebook wants to know, what types of Black movies do you like to patronize or avoid? What type of movie would you like to see on the big screen that does not depict oppression, buffoonery, or violence?

DH:  Well this is the interesting part. Our life imitates art. People have jumped on to the “I hate” bandwagon for way too long as opposed to celebrating. You realize that people don’t understand, when they complain about Tyler Perry.  If you complain about Tyler Perry, you have to complain about Flip Wilson. You also have to complain about Robin Williams in “Mrs. Doubtfire” as well as Martin Lawrence playing “Big Momma.” You can’t complain about one person and not complain about all the other people that did the same thing. I say we need to support any films that people of color are directing or acting in, because it’s our faces, and they’re our stories. So as long as we criticize then we’re apart of the problem.  The problem is that there are not enough of us on screen and, if there were enough of us, we would fill the seats at the Oscars and The Golden Globe Award shows. So until we see our faces in those seats, we should really quiet down our criticism and do what we can to be apart of the solution.  I go to every film that is acted, directed and produced by people of color to show my support.

TCV:  In your new book Ain’t That the Truth, what truth can readers expect to take away from reading the book?

DH: I’m really hoping people will take the opportunity to get this book. It’s a book that’s a real life changer and that’s not a rhetorical statement. It’s a book on reminders of who we really are, it’s about removing the ego and getting down to our true spirits. 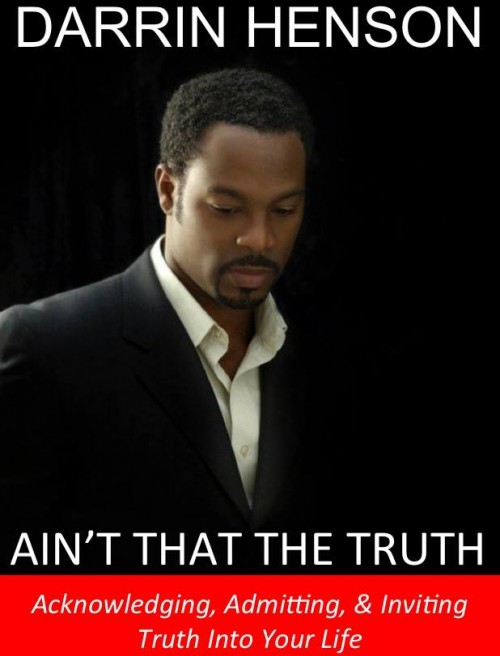 It’s a book about come as you are, but don’t stay as you are. It’s a reminder that we can move forward. It’s literally reminding us about positivity.  It’s one of those books that you can pick up today or five years from now and it’ll turn on a light in your head saying, “I’m better today than I was yesterday, because I’ve been reminded of what I’m worth.”

TCV:  As we all know, February is Black History Month and you wonderfully played Jim Brown, in the 2008 film, “The Express.” How was your experience portraying a historical figure?

DH: This is Black History Year, not just Black History Month. And people have to get out of that mind set as well, being given one month. What is that about? I’m black everyday! 365 days a year 24 hours a day, there’s no such thing as Black History Month to me. Somebody cannot dictate this is your month to me.  No, this is my year collectively. It’s what we celebrate all year. So I don’t acknowledge that so called month you know what I’m saying. It’s because one month of the year we focus on what black people have done, then eleven months out of the year we don’t think about it anymore.

As for playing Jim Brown, it was nerve racking, it was incredible, it was difficult, it was wonderful, and it was exhilarating all at the same time. I gained 40 pounds to play Jim Brown. I auditioned and then re-auditioned for the role and then ultimately won the part. It was probably one of the hardest jobs I’ve ever done and the most I have ever learned. We weren’t allowed to have cell phones on the set, because it was 1950 and there were no cell phones. It was an eye-opener from the inside out regarding segregation.

TCV: Tell us about your latest film “Black Coffee?”

Yes, its in theatres right now, I’m really excited about it!  People love it because they get to see people who look like themselves. It’s a charismatic film, filled with love and business. It’s really about what do I have the ability to do, and what do I need to do to find out about myself. I’m so happy to be apart of it. I actually heard the film is going out to the Caribbean and England in a few weeks.

DH:  Yes, I would love to do a movie similar to the “Tekken” movie I did which is a full martial arts film, that’s also on my website. But I’d love to do a movie like “X-Man,” or “Iron Man” or “Spiderman,” anyone of those films because it really is my love to play an action hero. I would love to be a character in one of those, and I’m training for it now so when the opportunity comes I will be more than ready.

TCV:  We spotted you a few years ago on the Red Carpet at the NAACP Theatre Awards with your son? We’d like to end our conversation with a question from Adrienne who wants to know, how do you balance fatherhood and family?

DH:  Well you know how people say find the time?  I say you don’t find time the time already exists. You just make the time. The most important thing in life is family, when all of the hype, glitz and glamour is gone the only thing you have is family.  My family is probably the inspiration on why I do what I do.  When people see my son’s with me on many different red carpets, I’m teaching them about the compound word, which is show business.  The entertainment industry is like a girlfriend that you break up with, she loves you and then she doesn’t answer your phone calls and then she doesn’t call you back until she’s ready to. That’s just how it is.

For more on Darrin Dewitt Henson visit his website at DarrinHenson.com.