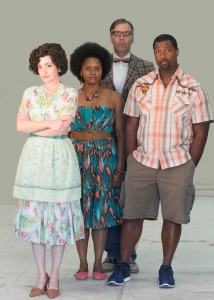 Recently I had the opportunity to see Clybourne Park, the Pulitzer Prize and Tony-Award winning play by Bruce Norris, which ends its limited run at the San Diego Repertory Theatre Sunday, February 10, 2013. When I first read the storyline, it brought back childhood memories of my own family and being the first African American family to move into a white neighborhood in 1965 in Tucson.

Directed by Sam Woodhouse, Clybourne Park is a variation of “A Raisin in the Sun,” Lorraine Hansberry’s 1959 play about the Youngers, a black family that moves to a white neighborhood in Chicago.

Naturally, as a child, race relations and real estate values were the furthest thing from my mind.  My parents, on the other hand, whose main goal in life was gaining upward mobility and to provide a better quality life for our family, struggled with building relationships while living in a community with stereotypical ideologies.

The ensemble cast performs remarkably as they emphasize precisely how emotions as a result of misconceptions affect family, neighbors and the community.

In act one, we meet Bev and Russ (Sandy Campbell and Mark Pinter), who are selling their house to the Youngers (who are talked about but never seen).  We are also introduced to Francine, the confident maid played by (Monique Gaffney), her husband, Albert (Matt Orduña), Priest Jim (Jason Muddy) and outraged neighbor, Karl (Jason Heil) and pregnant wife, Betsy who is deaf (Amanda Leigh Cobb).  Jason claims to be a good liberal but emphatically tries to convince Russ and Bev to reconsider selling their home to blacks.

Act two flashes forward to the same house a half-century later.  Apparently, white flight has turned Clybourne Park into a predominately black neighborhood that has since been transformed yet again, by a new set of progressive buppies attempting to force gentrification.

Arguably as the production suggests, little progress has been made when it comes to race relations in America.

I’d have to say that I’m glad I saw Clybourne Park. The play is not just about race but also about people and their struggles, and how closed mindedness and human actions can affect  an entire neighborhood.

Clybourne Park runs through February 10th at the Lyceum Theatre in San Diego.