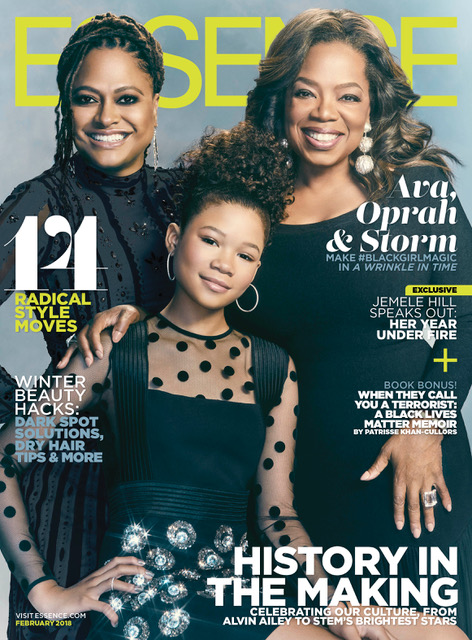 Check out Essence’s new cover featuring Oprah Winfrey, Storm Reid and Ava DuVernay in honor of the upcoming release of Disney’s A WRINKLE IN TIME

With an imaginary universe at her fingertips—and media mogul Oprah Winfrey and dynamic newcomer Storm Reid by her side—award-winning director Ava DuVernay brings the Disney feature A Wrinkle in Time to life next month. The highly anticipated vehicle marks the first time a woman of color has been entrusted to direct a movie that cost upward of $100 million (not to mention with a 13-year-old Black girl in the middle of it all!)

ON BEING APPROACHED TO DIRECT THE FILM: “I read it, and of course, as any reader, you put yourself in the book. You see people that you know inhabiting the world. So when I went in to talk to [Walt Disney Studios EVP of Production Tendo Nagenda] about it, I said, ‘This is how I see it. I see this as being multicultural, even down to the main character. I’m like, ‘She’s gotta be brown…’””

ON HER FIRST LEADING ROLE: “This is a huge milestone in my career, to be in a movie with Ava DuVernay directing and Miss Oprah being in.”