In 1971, President Nixon declared war on Cancer. In spite of this, cancer incidences have continued to rise in the U.S.  In the last 55 years, breast cancer rates have increased 568 times what they were in 1957.  In 1982, the Susan G. Komen Foundation was founded.  Since then, over $2 billion has been donated to research; however, we are no closer to a cure today than we were 20 years ago. Why?  Last year, nearly $2 trillion was spent on health care — and virtually all that money was spent on “treating” disease. Can you imagine what would happen if we found a cure for cancer?  Big Pharma would lose billions of dollars; huge cancer clinics around the world would close down or at least downsize; researchers would lose billions in grant funding for research. It would be a financial calamity for the cancer “industry.”  The sad truth is that there is more money in the disease, than there is the cure, or even prevention for that matter.  In 1997, the National Cancer Institute stated that “There are no practical ways to prevent breast cancer – only early detection.”  So I guess we are supposed to just cross our fingers and pray “that it doesn’t happen to me.”  I don’t think so!

We need to stop concentrating on “early detection” and focus on prevention. I don’t know about you, but I’d rather not get breast cancer at all.  Is it possible?  You bet it is! But like most good things in life, we have to work at it.  Our lifestyles today make it very difficult to be healthy.  We have fast food restaurants on every corner. Processed foods line the grocery story isles. Since processed foods have entered the world market, we have a seen a steady progression of cancer incidences. But it’s not just our food; it’s our cleaning products, our cosmetics, cell phone usage, and the over use of plastics.

What about early detection? Studies have shown that by the time mammography detects breast cancer, a woman has it for years. It detects the breast cancer just in time to be “treated” with surgery, radiation, and chemotherapy.  Then there’s the reconstruction!  Not to mention that mammography uses ionizing radiation; a type of radiation that has been shown conclusively to cause cancer.  So, we are using a technology that causes cancer, to detect it? Then there’s that painful breast compression which studies have also shown may in fact cause existing cancer cells to spread from the intense pressure being placed on the breast.  This all seems a bit counter-productive to me.

I had a lady tell me that mammography helped to prevent breast cancer. I of course asked, “How?” and she said “By finding it early.”  I explained that was detection, not prevention.  But the breast cancer marketing monsters blur that distinction and want us to believe that we are doing something right for ourselves by having annual mammograms.  But we’re not.  Mammography is dangerous and generally ineffective in women under 50, which is why in Dec. of 2009 the U.S. Preventative Task Force changed the mammographic guidelines from recommending annual screening for all women over 40, to women over 50 and every other year.

So what do women under 50 do?  Thermography!  Also known as Digital Infrared Thermal Imaging, or just Thermal Imaging. Thermography offers the earliest detection of breast cancer—within the first year of development in most cases—and is 100% safe. It uses no radiation, no breast compression and is FDA approved.  It is also the only preventative screening available today.  Thermography is able to identify conditions that lead to breast cancer, like estrogen dominance, lymphatic congestion and chronic inflammation; all highly treatable. Eliminate the condition, eliminate the risk.  The most recent study conducted at Cornell University in 2008 showed that Thermography averages 97% sensitivity (missed only 3% of breast cancer).   A woman’s age or breast density does not affect the outcome of a thermogram.  It’s ideal for women with breast implants, all women under 50 and women over 50 who have dense breasts or are concerned about the severe compression or radiation exposure. 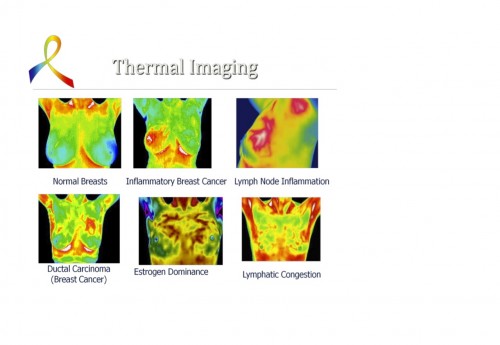 For more information about Thermography, call Catherine at Silk Thermal Imaging; (619) 788-6785 or [email protected], or visit us on line at www.silkthermalimaging.net.