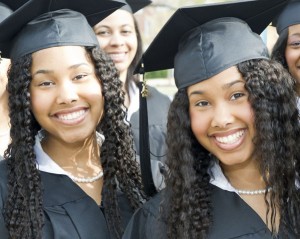 (Atlanta, Georgia) Kristie and Kirstie Bronner are identical twins.  And get this: They both have identical grade point averages.

As graduates of the  historically black college (HBCU) known for producing the best and brightest,  The Bronner girls came to the university prepared and eager to learn and, clearly their hard work paid off.

“Before we came to college we prayed that we would keep 4.0s all the way through but I don’t think we ever really expected it,” said Kirstie Bronner.

“We learned how to have a balance to life and then to be able to appreciate the journey of college and be more healthy and be more happy,” Kristie said.

They also believe that what you know is not as important as how determined you are when it comes to succeeding in both life and academics.

Both music majors, after graduation the two young women plan to complete a gospel album together.

The sisters are third-generation Spelman graduates. As youngsters, they looked up to their mother, Nina Cobb Bronner, C’85, and grandmother, Dorothy Gibson Cobb, C’56, and naturally wanted to continue the Spelman tradition. However, Kirstie changed her mind in high school and wanted to go to a school with more diversity. Her perspective shifted when the sisters took part in a National Society of High School Scholars campus tour of Spelman their senior year.

Spelman College’s 126th Commencement will be held Sunday, May 19 at 3 p.m. at Georgia International Convention Center. Baccalaureate service will take place Saturday, May 18 at 9 a.m. at Spelman.