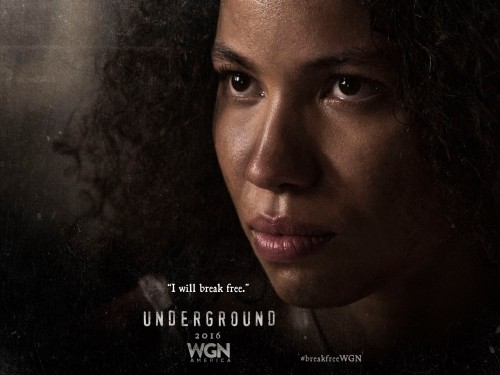 WGN America announced today that “Underground,” the highly-anticipated original series, will premiere Wednesday, March 9.  The 10 episode series takes viewers on a pulse-pounding journey with revolutionaries of the Underground Railroad.  From creators and executive producers Misha Green and Joe Pokaski, and executive producer and Academy Award-winner John Legend, the 10-episode, hour-long program stars Jurnee Smollett-Bell and Aldis Hodge, and follows a group of courageous men and women who use their ingenuity, power and perseverance to attempt the greatest escape in history and break free, despite the dire consequences that awaited them on the other side.  “Underground” is produced by Sony Pictures Television and Tribune Studios.

In WGN America’s “Underground,” a courageous blacksmith Noah (Aldis Hodge) covertly organizes a small group of his fellow slaves and pieces together a daring plan of escape across hundreds of miles to freedom.  The odds of success are razor-thin for those who make it off the plantation, while the risks, dangers and obstacles multiply each step of the way.

Check out the EXCLUSIVE trailers, below:

“The Plan” is distinctly told from the viewpoint of a slave named Noah, portrayed by Aldis Hodge

“Wanted” is told from the perspective on one of the slave owners, Tom Macon (played by Reed Diamond).