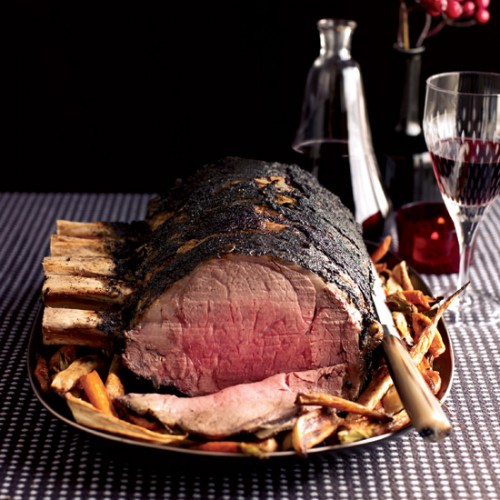 How the Grinch Stole Christmas is one of my favorite children’s books for the holidays. This recipe is really just a roast beef that requires a little more time and effort. The kids might complain about the wait, but they’ll be talking about the “Roast Beast” until they see their presents.

1. Preheat oven to 325*. While oven is heating chop your vegetables. I always chop mine and throw them in a large bowl, then set aside for later.

2. Season the beef with salt and pepper. Dredge in flour (making sure all sides are covered).

3. On the stovetop, heat 2 tablespoons of olive oil in the French oven. Sear meat on all sides, then remove and set aside.

4. Add 2 more tablespoons oil to the French oven. Add vegetables and garlic and cook until softened.

5. Add wine, brandy, tomatoes (with liquid), chicken stock, bouillon, rosemary, and thyme. Once boiling, place the meat in the French oven. Cover, remove from stovetop and place inside oven for about 2.5 hours, or until meat is fork tender. About an hour into the cook time turn heat down to 250*.

6. When meat is finished cooking, remove from oven. Place meat on a separate plate. Remove the herbs and discard. Remove about half of the liquid and veggies and place in a separate bowl. Puree using an immersion blender (or food processor) and return to French oven. Place on the stovetop and let simmer on low heat. While simmering, mix butter and 2 tablespoons of flour together and add to pot. Let sauce simmer until thickened.

7. Serve meat with sauce and veggies on top. I served toasted garlic parmesan bread alongside the meat.