In my office on the wall, there are many items attached and displayed in the general per functionary manner.  Upon this wall there are licenses, shingles, and commissions, slogans, pictures and calendars. But the most significant and obvious is a print of Dogs Playing Poker.  Yes, dogs playing poker.  Several dogs sitting around a table, cards, chips, drinks and cigars abound.  The caption of this print is “A Bold Bluff”, by C.M. Coolidge, circa 1903.  Aside from the history behind this painting and it’s diagnosis as an example of “working class taste” (http://en.wikipedia.org/wiki/Dogs_Playing_Poker).  The more I study this picture again today I reflect upon how much it epitomizes, to me , the situation we are witnessing today in Washington D.C. 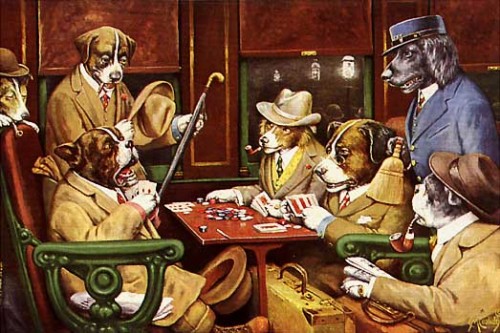 Congress is faking it.  On both sides, committed to the end, they are faking it.  A bold bluff indeed; Like Dogs playing Poker. Those at the table are at pause with curiosity and bewilderment as they witness the call, in play.  There will be a deal, we’ve seen these ‘children’ play this game before, it shouldn’t come as any surprise, they will posture, rant, point fingers, gnash their teeth and stomp their feet.  Both sides have already realized they have played their best hands, there’s nowhere else to negotiate to and there isn’t really any time left.  The past three Decembers have begot important eleventh-hour advancements on health care in 2009; tax cut extensions in 2010 and the payroll tax holiday in 2011.  As I said earlier in the year, a Pox on both of their houses (sorry Shakespeare), I’ll temper my rant, right there, for my own sanity and yours.

For the week ahead, I expect to see the U.S. markets continue to tread water despite the political theater.  The markets have priced in a deal and regardless to what the mongrels in Congress are blabbering on about, a deal is coming soon and that it will be functional.  Europe is showing a holiday rally with the German and French markets cresting at 52 week highs and the Euro sustains a six week high.  The Greeks announced terms under which they will (somehow) be buying their debt back, and Spain officially asked for European funds to recapitalize its banking sector.

I remain optimistic.  No if’s, and’s or but’s about that.  I’m also a horrible poker player and I couldn’t win a hand even if I had expert guidance whispering in my ear on which cards to play.  I accept that and respect that I know what I know and that poker simply isn’t my game. However, as a student of History, Politics and Finance, the risks of an impasse in the talks that leads to either a deal or no deal at all are quite real.  The great divide between the parties on how to proceed isn’t real; it’s imaginary and made for TV.   The Republicans and Democrats both feel empowered by the election, that empowerment is like a cheap poker chip you buy at the mall.  It’s worthless.  They both know that the cashier (the American Public) expects a transaction and the currency that Congress wants to utilize isn’t going to be accepted anytime soon.  Congress is expected to adjourn by the 14th, and the last thing the American Public wants to wake up to on Christmas day is a massive lump of coal hanging in a stocking above the fireplace.  That would literally entail a new Christmas Day massacre for Congress and they are well aware of it.  I remain cautious, slightly uncertain but completely optimistic.
Dempster R. “Bobby” Cherry is a Financial Advisor,  representing Nelson Securities, Inc.