Highlights, key quotes and phrases from the First Lady of The United States, Michelle Obama, as she  addressed the Democratic Convention On September 4, 2011.

“You see, Barack and I were both raised by families who didn’t have much in the way of money or material possessions but who had given us something far more valuable – their unconditional love, their unflinching sacrifice, and the chance to go places they had never imagined for themselves.”

“We learned about gratitude and humility – that so many people had a hand in our success, from the teachers who inspired us to the janitors who kept our school clean…and we were taught to value everyone’s contribution and treat everyone with respect.Those are the values Barack and I – and so many of you – are trying to pass on to our own children. That’s who we are.” 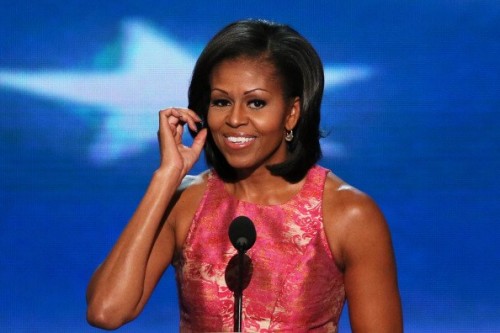 “After so many struggles and triumphs and moments that have tested my husband in ways I never could have imagined, I have seen firsthand that being president doesn’t change who you are – it reveals who you are.”

“But at the end of the day, when it comes time to make that decision, as President, all you have to guide you are your values, and your vision, and the life experiences that make you who you are.”

“That’s why he signed the Lilly Ledbetter Fair Pay Act to help women get equal pay for equal work.

That’s why he cut taxes for working families and small businesses and fought to get the auto industry back on its feet.

That’s how he brought our economy from the brink of collapse to creating jobs again – jobs you can raise a family on, good jobs right here in the United States of America.

When it comes to the health of our families, Barack refused to listen to all those folks who told him to leave health reform for another day, another president.

He didn’t care whether it was the easy thing to do politically – that’s not how he was raised – he cared that it was the right thing to do.

He did it because he believes that here in America, our grandparents should be able to afford their medicine…our kids should be able to see a doctor when they’re sick…and no one in this country should ever go broke because of an accident or illness.

And he believes that women are more than capable of making our own choices about our bodies and our health care…that’s what my husband stands for.

When it comes to giving our kids the education they deserve, Barack knows that like me and like so many of you, he never could’ve attended college without financial aid.

And believe it or not, when we were first married, our combined monthly student loan bills were actually higher than our mortgage.”