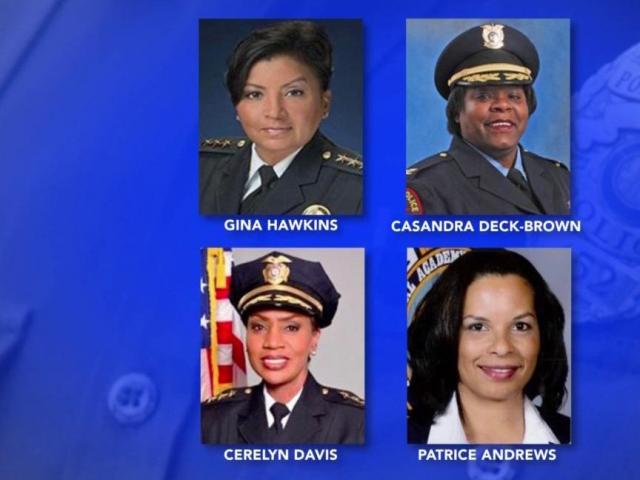 Six African-American women for the first time in history– are sitting police chiefs in the state of North Carolina.

Among them are Raleigh’s Cassandra Deck-Brown, Durham’s C.J. Davis, Morrisville’s Patrice Andrews and Fayetteville’s Gina Hawkins, four out of the six whom spoke to the local station, WRAL’s Lena Tillet  last week about their experiences being women of color in leadership positions within the force.

“We’ve broken a glass ceiling,” Deck-Brown told WRAL about being women of color in leadership positions within the force. Her class at the Raleigh Police Department only had four women, a record at the time.

“So, becoming chief, the honor is knowing that somebody else has that opportunity to get there.” Her class at the police academy only had four women, which was a record at the time.

The women have over 10

0 years of experience among them, but still, feel pressured to prove themselves to assuage the doubts of doubting men.

Andrews became the fourth black female police chief to be appointed in her district. While Hawkins became the first woman and first minority to do so. “There was a proving ground,” Andrews said of her early years in Atlanta’s police department. “It wasn’t because I was a black woman. It was because I was a woman, and I think (everyone just wanted) to see, ‘What is she really made of?’”

According to the National Center for Women and Policing, Women account for only 13 percent of the police force in America.

Regardless of their achievements, the women acknowledged that – as black mothers – there is still a requirement to have discussions with their children about race relations and the police.

The chiefs recognize the tensions that exist between law enforcement and the black community and the unique challenges it poses. The women added that “compassion, empathy, communication and quick-thinking” are key to being good chiefs, which has influenced similar appointments in other parts of the country.

“Know that it’s not just happening here,” Andrews said. “It’s happening in Dallas, in Portland – it’s all over. It’s happening all over, and I just tell you, I love the black girl magic.”