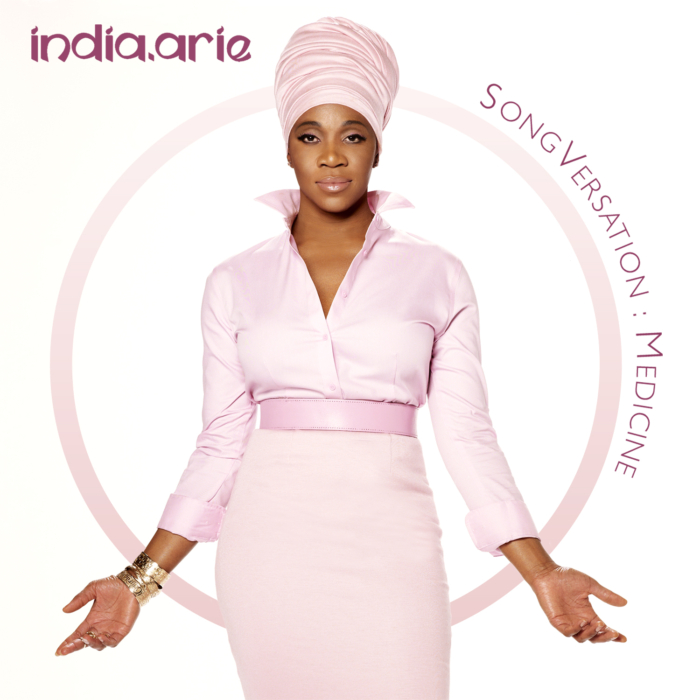 Multi-Grammy award-winning singer/songwriter India.Arie is excited to announce the release of her upcoming EP SongVersation: Medicine that will be available on all digital platforms June 30. An extension of her 2013 release SongVersation, which received rave reviews from Rolling Stone, Billboard and Vibe among others, this seven song EP is India’s offering during these tumultuous times. The first single featured on the EP “I Am Light” (Click Here) appeared on the Beyond The Lights soundtrack as well as she performed “Breathe” (Click Here) alongside Erykah Badu on the 2016 Soul Train Awards.

“‘SongVersation: Medicine’ was made to be listened to in a quiet time, prayer, meditation, Yoga,” states Arie who continues, “My wish is that these songs bring softness, clarity, calm, and inspiration.”

Since her introduction to the music industry in 2001 with her debut album Acoustic Soul, India.Arie’s mission has always been to spread love, healing, peace, and joy through the power of words and music. Since 2011, India has been touring around the country with performance paradigm that she calls, SongVersation, which is an interactive experience that is part meditation, part prayer, part fellowship and part action. Fans had the opportunity to view her SongVersation nationally in 2016 when she appeared on OWN’s Super Soul Sessions (Click Here) and took the attendees on a journey on how to use their life experiences to break down, break through, break the shell, elevate and fly to being worthy of a better life.
India.Arie will also be making several appearances at the 2017 ESSENCE Festival during Independence Weekend in New Orleans. Kicking off a weekend-long of festivities, she will be performing on the main stage on Friday, June 30 at the Mercedes-Benz Superdome. On Saturday, July 1, India will be appearing at the New Orleans Ernest N. Morial Convention Center for an interview on the Center Stage as well as participating in the Beauty Expo. Concluding the weekend on Sunday, July 2, India.Arie will be performing a SongVersation that she wrote especially for the Essence crowd, where she will bring song and storytelling to life for attendees on the Empowerment Stage for the Moment of Power followed by a fan meet and greet at the Palmers booth.
In addition, India.Arie will be joining Oprah, Gayle King, the O, Oprah Magazine editors and more aboard the “Share the Adventure Cruise to Alaska” aboard the ms Eruodam via Holland America Line on July 15 to July 22. The SuperSoul 100 Member will also be joined by Angela Davis and Glennon Doyle Melton.  The four-time Grammy Award-winning singer will be doing a SongVersation Performance as well teaching her  SongVersation practice class  – As seen on her Episode of BEING: India.Arie on CENTRIC. For those not able to catch India.Arie within the upcoming weeks, she will be teaching The SongVersation Practice at Berklee College of Music in Boston this fall.
FOLLOW INDIA.ARIE:
Facebook:@indiaarie
Instagram: @indiaarie
Scroll to Top