Is Trump pulling a Political “Rope-a-Dope?” By D.L.White 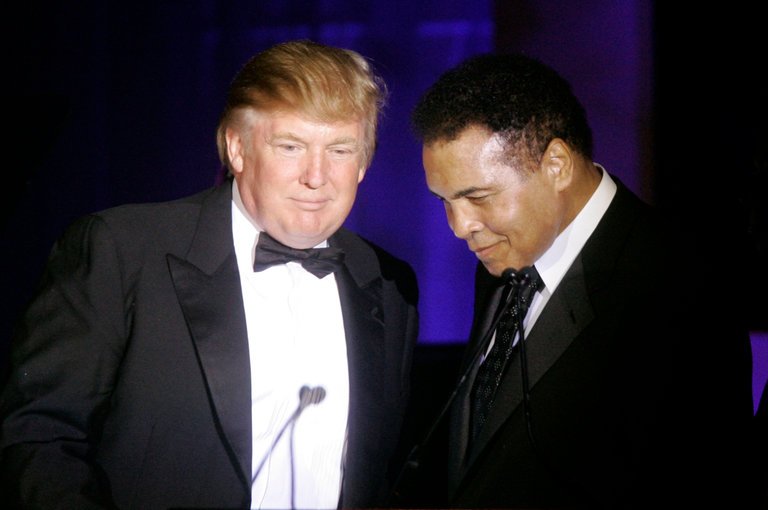 Is the 45th President of these United States purposely presenting two distinct personalities to mislead, confuse, and antagonize as well to ignite his base?

Who does that? He also slammed the Iran Peace Agreement, but said nothing about Russia’s invasion of Crime or Putin’s support of Assad (Syrian leader) and his use of deadly chemicals on those opposed to Assad’s regime.

A few weeks ago, one Donald J. Trump, be it 48-72 hours after the violence erupted in Charlottesville, stood before the American public and attributed blame for the racially charged and life-taking incident on “both sides.”

While it does take “two to tangle,” the violence as a result of using a vehicle (terrorist style) that took the life of 30 year-old Heather Helter was solely that of member and loyalist of the Neo-Nazi’s and White Supremacist groups.

“There was one group holding a legal protest and there were very violent and angry counter-protestors on the other side who agitated and caused the event to get out of hand,” stated Trump, in an attempt to make counter-protesters as responsible as the Tiki-torch carrying members of the KKK, White-Supremacist and Neo-Nazi groups that had ascended on this once quiet and peaceful township of 50,000.

Response to the presidents ill-fated attempt to address the situation was quick, direct and without measure on both sides of the political aisle, from members of Congress to former Presidents, Civic and Community members, all condemning racism, and the groups representing division and hatred.

In what appeared to be an attempt to vindicate (and explain himself) as well to ignite his base, Trump took his show on the road and held a campaign like stop in Phoenix, in which he shared part of his speech to the nation, stating he condemned the racist groups and all they stood for.

The President, complained, whined, and returned to his campaign rhetoric calling for a wall on the Southern border, condemning Affordable Healthcare and GOP leaders Mitch McConnell and Arizona’s members of Congress both Flake and McCain.

Trump also hinted to pardoning (taking care of) embattled, and convicted former Sheriff Joe Arpaio (Trump has since pardoned the former Maricopa County Sheriff, to the dismay of many).

Trump’s actions and behavior in Phoenix, was consistent with the immature, non-professional and certainly poorly scripted behavior he has often demonstrated during his time in office and prior to taking office.

The following day, the President demonstrating a much different behavior, actually one of a more mature and prepared (and scripted nature), spoke to Veterans in Nevada.

Staying on script and not complaining or whining about what has not been done on his watch, Trump acted like he had sense…..He spoke of efforts to ensure veterans received the necessary healthcare needed in a timely manner as well as other programs he and his administration are considering on behalf of Vets.

Great! Where has this person been? Was this finally the “presidential pivot” many had hoped, prayed for and anticipated?

It was shorted lived, on Air Force One going back to D.C., as well as the next day, Trump was back at it condemning congress, calling out individuals who question his behavior lack of presidential demeanor.

This begs the question, is Donald J. Trump, the 45th president of the United States pulling a Muhammad Ali? 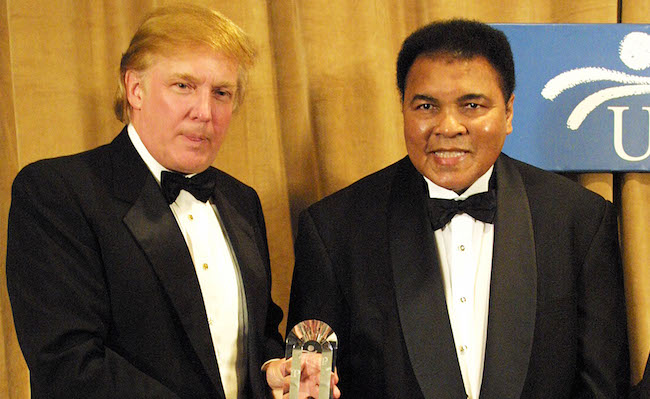 In 1974, Ali, was still in process of regaining the title that he had to relinquish when he refused to enter the military and fight in the Vietnam War.

A comeback fight in 1970 came up short to the then Heavyweight Champion Smoking Joe Frazier, who put Ali on the mat with a crisp left-hook in the 15th round of their bout.

Foreman, a lumberjack of a fighter demolished Frazier to win the title, knocking Smoking Joe down (6) times, pummeling him (Frazier) at will, to take the crown at age 24. The young Foreman looked invincible.

The Thriller in Manila was set for Zaire, Africa and many boxing enthusiast thought Ali would be horribly beaten by the much younger, stronger Foreman who was also six foot four.

Unbeknownst to many, Ali employed a boxing tactic of pretending to be trapped against the ropes, goading his opponent (young, strong Foreman)  into throwing “ineffective punches” as he (Ali) leaned far back on the ropes, taking only glancing blows.

Ali’s trainer Angelo Dundee, and corner man Budinee Brown both, were furious with Ali, employing him to get off the ropes and fight. Ali would throw a series of stinging punches at the end of each of the first seven rounds.

Foreman, an Olympic medalist like Ali (the former Cassius Clay) had not gone more than five rounds in any of his professional fights.

Ali would test Foreman and periodically move off the ropes, throwing a few punches measuring his opponent, his stamina and power.

When it was apparent to the seasoned Ali, Foreman could barely stand; he strategically moved him to the center of the ring and began to dance and throw a series of combinations, knocking Foreman out.

The unbelievable feat was hailed a great upset. Ali, aging and out of boxing for a while. Ali, who lost to Frazier, had done the unthinkable, the unconceivable, to regain the title.

Is Donald J. Trump, pulling an Ali? Is he playing “rope-a-dope” playing possum, to antagonize those opposed to him, while constantly igniting his base?

Ali had a purpose in using the rope-a-dope against the younger and stronger Foreman. What is Trump’s purpose? Does he have a purpose or even a plan?

The one clear, unequivocal, unquestionable thing Trump has done is divide the nation. In less than a year in office (only eight months) there has been very little policy or diplomacy taking place and a great deal of chaos, confusion and golf.

Trump has vacationed more (to his own resorts) and played more golf than any president in history. And while it is not a problem to take time off, how about getting something done before hitting the back nine?

Is the 45th president of these United States pulling an Ali? Let’s remember, Ali, did not use that tactic all the time. He boxed and outclassed most of his opponents.

Your thoughts? Agree or disagree?

Let us know your thoughts here.

Or, the author D.L.White, can be reached via email at dwhiteQ2@gmail.com