Jackie Robinson Biopic, “42” Knocks it Out The Park Earning Over 27 Million 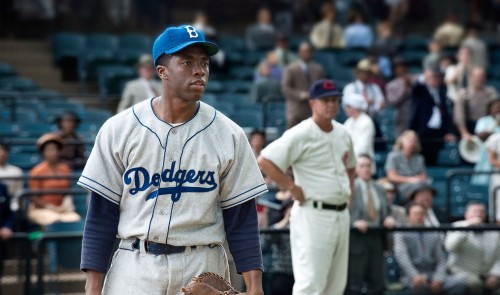 Jackie Robinson biopic, “42” surpassed the competition this weekend, giving Warner Brother studios its first hit of 2013. Directed by Brian Helgeland, the film was forecast to earn about $20 million and wound up taking in $27.3 million.

The weekend’s other wide opener, horror spoof “Scary Movie 5,” was second and took in $15 million, well below what other entries in the franchise have done for the Weinstein Company. Holdovers “The Croods” and “G.I. Joe: Retaliation” were third and fourth, with $13.2 million and $10.8 million respectively. Last week’s No. 1 film, “Evil Dead,” was fifth with $9.5 million.