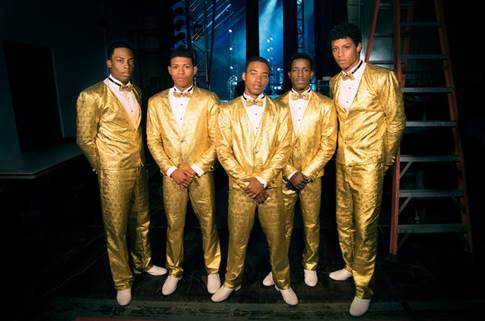 THE NEW EDITION STORY is the brainchild of Collins who says the idea first came to him when he was producing 25 Strong: The BET Silver Anniversary Special (2005) and New Edition was set to perform. “New Edition was pure magic on stage.  The first time I got to see the behind the scenes challenges that they were dealing with to function as a group was during production of the special.  I reached out to Michael Bivins after the show and we started the process to produce a film based on the group,” said Collins. “Ten years later, after production delays, we were finally able to tell their story.”

Jimmy Jam & Terry Lewis and Kenneth “Babyface” Edmonds, with 17-Grammy Award wins collectively (11 for Babyface, six for Jam & Lewis, all receiving awards for Producer of the Year) were already an integral part of the careers of the members of New Edition. Jimmy Jam & Terry Lewis produced New Edition’s 1988 seminal, Double Platinum-selling album “Heartbreak,” their highest selling album to date as well as produced Ralph Tresvant’s solo breakout #1 single “Sensitivity” and Johnny Gills #1 single “Rub You The Right Way.”  ‘Heartbreak’ ushered in a new, mature sound for the band, introduced Johnny Gill into the group after the group voted out Bobby Brown and featured five singles including #1 & #2 Billboard R&B tracks “Can You Stand the Rain” and “If It Isn’t Love” respectively.

“Terry and I came in at a pivotal time when they were having internal issues and growing pains. Fans will get the true behind-the-scenes story of this key phase in their personal lives and careers,” said Harris. Lewis added,

“Their songs are like a time capsule, not only capturing the quintessential 80’s R&B sound but also document the New Edition journey particularly transitioning from a boy band to adult stars. ”

Edmonds will serve as the music producer for the first half of THE NEW EDITION STORY, but ironically he and producing partner L.A. Reid were responsible for crafting almost half of the hits, including the Grammy-Award winning “Every Little Step,” from Bobby Brown’s explosive 1988 sophomore solo album, ‘Don’t Be Cruel.’ “I learned a lot about Bobby and the band dynamic during the making of ‘Don’t Be Cruel.’ But I also lived and breathed 80’s R&B because I was performing with my band (The Deele) and producing with L.A. Reid, so I make sure the feeling was captured,” said Babyface.

Chris Robinson, is responsible for a long list of iconic music videos for the likes of Jay-Z, Snoop Dogg, Pharrell, Diddy, Usher, T.I., Nas, Mary J Blige, Alicia Keys, Common, Boyz II Men and more. His biggest goal was to capture the band’s distinct look and feel. “We went through great pains to get every detail right because true New Edition fans and 80’s babies like myself will know. That was such a distinctive and colorful era. I think we succeeded,” said Robinson.