Skip to content
It’s Gospel music like you’ve never heard it before! The Singleton Entertainment Corp and ReShift Music announces the long-anticipated release of the new much-talked-about single “WANNA BE CLOSE” by gospel recording artist JKingdom available now on iTunes, and all digital music retailers. 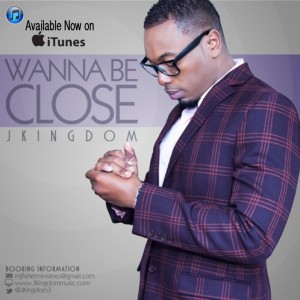 As a successful writer and performer JKingdom has worked with the likes of Kelly Price, CoCo of SWV, and mega composer and producer Anthony “Shep” Crawford.  He’s also had the opportunity to write for Yolanda Adams.  In addition, he is the Sr. Pastor of  the Greater Zion Church Family in Compton, one of the fastest growing churches in the Los Angeles County and founder and former leader of the ‘Voices of Destiny,’ a 50+ voice choir that gained national recognition as they swept the competition at the 2010 Verizon ‘How Sweet the Sound’ competition.
JKingdom brings a fresh, new, mainstream sound and dynamic to the world of gospel music. His uplifting, electrifying and high-energy performances have gained him major notoriety and a faithful fan base in the faith community and abroad.  More than just an artist, he is a movement.  In addition to being an amazing, anointed and captivating performer, he is also Sr. Pastor to more than 4000 members at the Greater Zion Church Family in Compton, and is often featured in the media as a community leader and advocate for peace and education. “WANNA BE CLOSE” is the first single release from his forthcoming album titled “Reconciled”.
Check out the “Wanna Be Close” video on Youtube!
Media Inquiries:
Reid Johnson, publicist
Infinite Scope PR
[email protected]
Scroll to Top