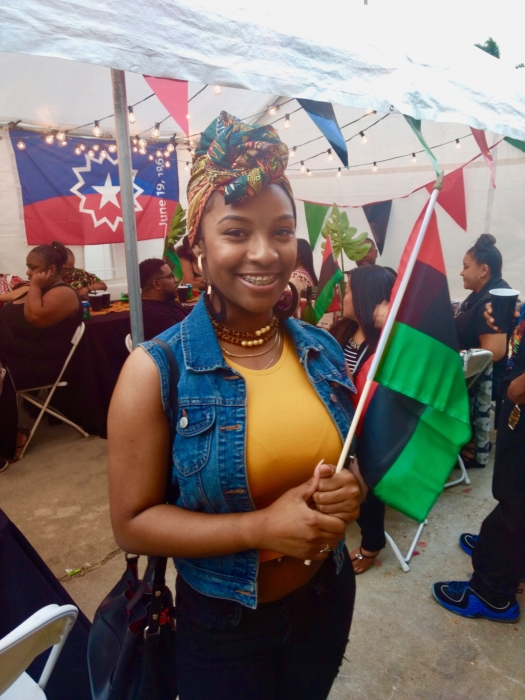 Today is Juneteenth, also known as Juneteenth Independence Day or Freedom Day, which commemorates the emancipation from slavery in the United States.

Growing up in Arizona, my family has always celebrated Juneteenth, especially with the majority of us being from Texas. In Tucson, where many of my family left Texas to live, I recall the Black History celebration as a vibrant two-day event filled with food, games, entertainment, live bands and history lessons. And held in one location—either a city park or a large community center.  Keep in mind, when I lived there the population was less than one percent Black.

From what I’ve heard, the celebration lives on and remains in one central location.  See tucson.com article for more details on this years celebration.

This year, my family was invited attended a more intimate celebration in Carson, CA, at the home of two young millennial sisters. The Poe Sisters, who asked that guest come dressed African print attire, decorated their home festively themed in the colors of Africa—Red, Black and Green, featuring  three flags, African, Black Lives Matter and Juneteenth. Tables were covered with black table cloths lined with kente cloth table runners,  candles, plants and an informational pamphlet which invoked learning and chatter among guests about the history of Juneteenth.

The main festivities were held in the back yard, which included a delicious soul food menu (ribs, chicken, mac’n cheese, greens, and more), poetry reading, a test about the history of Juneteenth, and card games such as: spades and the original Black Card Revoke. If you haven’t played Black Card Revoke, it’s a must and so much fun!

Whether you celebrate it at large or small gathering, it’s important to know the history of Juneteenth and how it represents a turning point in American History.

In honor of Juneteenth here a six facts that represents the turning point in history.