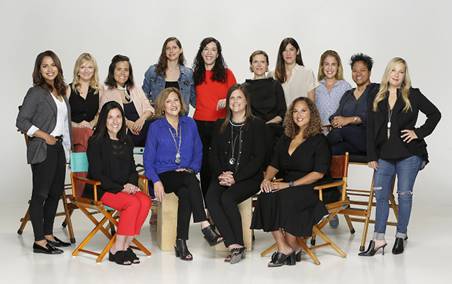 UNIVERSAL CITY, Calif. – July 25, 2018 – NBC is taking a significant step to put more women in the director’s chair with the announcement of its inaugural class for Female Forward, the network’s annual initiative founded last August by then-president Jennifer Salke that gives female directors a pipeline into scripted television.

Launched last year, Female Forward aims to increase female representation in the director’s chair by providing talented female directors with the experience and connections they need to launch and sustain their careers. Finalists will shadow experienced TV directors on up to three episodes of the NBC series in which they have been paired, culminating with an in-season commitment to direct at least one episode.

“As executives who have consistently been working to get more female directors on our shows, it’s so meaningful that one of our first big acts as co-presidents is to officially welcome this inaugural class of talented directors to the NBC family,” said Lisa Katz and Tracey Pakosta, Co-Presidents, Scripted Programming, NBC Entertainment. “What makes this moment even more significant is the realization that by next season our colleagues across the industry will have a larger pool of experienced women to choose from as they are staffing their shows, and that number will multiply as the program culminates year after year. Our goal is to completely eliminate the often-heard excuse – which we strongly believe simply isn’t true – that the reason there isn’t parity in the field is that there aren’t enough qualified women, and we feel confident that this program will begin to change that narrative. ”

“We’ve proven time and again that our pipeline programs discover undeniable talent who bring a fresh point of view to their work, and our first Female Forward class is no exception,” said Karen Horne, Senior Vice President, Programming Talent Development and Inclusion, NBC Entertainment. “Diversity in the director’s chair encourages inclusion at every echelon of a production, and our hope is that these 10 women will join the ranks of other women directors who have exponentially affected change by opening doors for those who follow them not only in their field, but across our industry.”

The network partnered with Lesli Linka Glatter, acclaimed TV director and a longtime mentor to women in the field, as well as enlisted an advisory council of celebrated directors including Norberto Barba (“Mayans MC”),Ruben Fleischer (“Superstore”), Liz Friedlander (“Conviction”), Pamela Fryman (“How I Met Your Mother”), Nisha Ganatra (“Transparent”), Peter Horton (“New Amsterdam”), Gail Mancuso (“Modern Family”), Ken Olin (“This Is Us”), Julie Anne Robinson (“Castle Rock”), Millicent Shelton (“Marvel’s Runaways”) and Michael Spiller (“Champions”). Glatter chairs the council who helped select the inaugural class and whom will serve as their advisors and mentors throughout the program.

“Directing is not an easy road for anyone, but it should be an equal playing field and for the first time, I truly feel that we are at a tipping point,” said Glatter. “I am hopeful that there will be a time in the near future when this is no longer an issue. Female Forward offering qualified and talented women directors the chance to not only to shadow, but to actually direct an episode is a game changer. I’m so excited about this inaugural group of directors and can’t wait to see them at work.”

To be eligible for the program, the Female Forward finalists were required to have directing experience in their respective fields whether their medium of choice is feature films, music videos, commercials, digital content and theater. Candidates could have no more than one scripted television directing credit.

The first class of Female Forward directors represent a variety of backgrounds, and more information about them including their bios can be found at NBCFemaleForward.com.

Female Forward is NBC’s annual initiative for female directors that aims to acheive gender parity among scripted series directors by systematically increasing the number of qualified women in the field. The program gives eligible female directors the opportunity to shadow up to three episodes of an NBC series, culminating in an in-season commitment for each participant to direct at least one episode of the series she shadows. The network partnered with acclaimed TV director Lesli Linka Glatter as well as enlisted an advisory council of celebrated directors including Norberto Barba, Ruben Fleischer, Liz Friedlander, Pamela Fryman, Nisha Ganatra, Peter Horton, Gail Mancuso, Ken Olin, Julie Anne Robinson, Millicent Shelton and Michael Spiller to serve as their advisors and mentors throughout the program. Female Forward is one of the tent pole initiatives within the NBC Talent Infusion Programs (NBC TIPS) that promotes and encourages people of diverse backgrounds to become the next generation of storytellers. For more information, visit NBCFemaleForward.com.

Since 2000, NBC has been dedicated to discovering and nurturing on screen and behind-the-camera talent of diverse and inclusive backgrounds through the NBC Talent Infusion Programs (NBC TIPS). NBC TIPS are amongst the most extensive and robust diversity and inclusion programs in the television industry. They feature more than 20 programs including Writers on the Verge, the Diverse Staff Writer Initiative, Emerging Directors Program, the StandUp NBC nationwide search for stand-up comedians and the NBCUniversal SHORT FILM FESTIVAL that celebrates diverse stories and the filmmakers who create them. Program alumni are celebrated producers, writers, directors and actors in the entertainment industry who have gone on to win Emmys, Golden Globes and SAG Awards and include Deon Cole, Donald Glover, Lil Rel Howery, Mindy Kaling, Danny Pudi, Natasha Rothwell, Danielle Sanchez-Witzel, Keto Shimizu and Alan Yang. For more information, visit NBCUniTIPS.com.