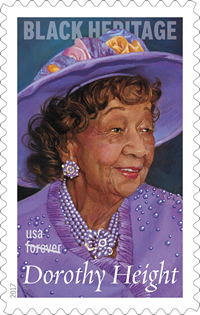 The U.S. postal service over the past couple of days just announced that trailblazer Dorothy Height will be honored as the 40th stamp in the Black Heritage Forever series in 2017.

Height was not only an activist but dedicated her life to fighting for African-American women. Height was the president of  National Council of Negro Women for forty years, and didn’t receive the praise most of the men who were part of the civil rights movement did, but that didn’t stop her from her work. Height also served as president of Delta Sigma Theta from 1947 to 1956.

“Although she rarely gained the recognition granted her male contemporaries, she became one of the most influential civil rights leaders of the 20th century,”  the organization said.

The stamp features artist Thomas Blackshear II’s gouache and acrylics on board portrait of Height. The painting is based on a 2009 photograph shot by Lateef Mangum, and art director Derry Noyes designed the stamp.

Dorothy Heights is the 15th black woman to be named in the commemorative collection.