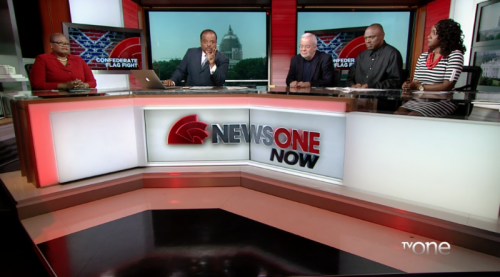 (WASHINGTON, D.C.) – JUNE 22, 2015 – Today on News One Now, host and managing editor Roland Martin spoke to the urgent need for Americans to recognize the confederate flag as a symbol of racism and hatred. “This flag simply is the most racist symbol that has ever been produced by the United States of America”, said Martin. Panelists such as Christian Writer Rev. Jim Wallis, Bishop Harry A. Jackson, Jr., and NBC BLK Contributor Danielle Moodie-Mills all gave their opinions on how America should tackle the issue of abolishing its racist past and present.

Here are excerpts from this mornings conversation:

On the confederate flag being seen as heritage not hatred:

This is white denial. Whites want to say this is an incident, individual incident. White supremacy leads to white privilege; white privilege is a nice way of saying white supremacy. The white denial here has to be confronted not just by Black people, but white people. This is denial. Our original sin is white racism. It has got to be named for what it is.” – Rev. Jim Wallis

My concern, which is different than a minister’s, is that he talked about white people and what they need to do. Black people need to be more vigilant, need to be more thoughtful about the fact that we live in a white supremacist society.” – NBC BLK Contributor Danielle Moodie-Mills

Tomorrow on News One Now, Martin will examine the issue from other perspectives, speaking with an All-Caucasian Evangelical Panel including Rev. Jim Wallis and President of the Southern Baptist Ethics & Religious Liberty Commission Russell Moore to hear their point of view about the Charleston Church Massacre.