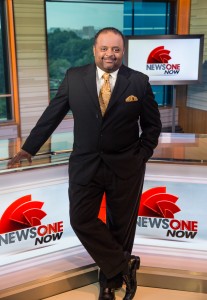 If you’re avid fans of Roland Martin’s morning show, News One Now on TV One, like we are, imagine the shock of learning this morning while watching that the show is abruptly being canceled because of budget cuts.

According to the New York Post’s Page Six:

“They called a meeting on Wednesday and told the staff they were canceling the show. They’re having significant financial problems and they have to scale back,” said a source.

“There were lots of tears … the staff was completely caught off guard,” the source added.

According to a memo sent by TV One’s interim general manager, Michelle Rice, it’s going to be a bad holiday for NewsOne staffers:

While we will continue our long-standing partnership with Roland Martin to ensure his important voice can be heard across all Urban One platforms examining issues of importance to the black community, we regret this decision adversely affects several of our valued colleagues whose positions will be eliminated with the suspension of the show.

During this mornings episode, Martin confirmed the that Dec. 21 would be his last show and thanked his fans for their support.

We’re sorry to see the show end. Hopefully something will get worked out.