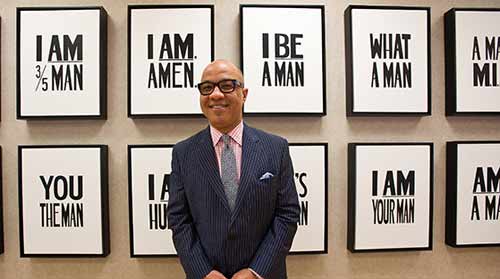 What excites you most about taking on the presidency of the Ford Foundation?

Darren Walker: I have a chance to make a difference by leading a remarkable institution committed to social justice when the very notion of social justice is being contested. Our country’s policies and discourse sometimes feel retrograde, taking us back to when justice was more rationed…particularly for low-income people and people of color. I have a huge opportunity to fortify those voices.

We made great progress …in poverty reduction, employment for low income and low skill workers, in increased participation in higher education and high school graduate rates…When I hear, “Oh, the War on Poverty was a waste of time,” I don’t accept that. You have a hard time convincing me that investments in human capacity and in the potential of people like me to advance in society have somehow been for naught.

How would you describe youth unemployment as a social justice issue?

DW: This is not only a phenomenon in the United States, it’s a global phenomenon. If there are no job and career opportunities for young people, you’re going to have social unrest and instability. This is part of the broader challenge around inequality because it reduces opportunities for many while accreting huge benefits to a few. So, there is a global struggle around justice. Faces may look different but the social features in a given society are similar.

How do you explain Ford’s role to newcomers trying to learn how America works?

DW: The non-profit sector is a somewhat uniquely American phenomenon. It’s understandable for some immigrants to be unable to contextualize it when they arrive.

Immigrants experience the Ford Foundation through organizations and people who look like them…If you are Hmong from Vietnam, Cambodia or Laos, and you turn up in Minneapolis, you learn that Ford is supporting a local Hmong-run organization to help immigrants transition or with legal advocacy. We don’t say, “Hmong community, we’re the Ford Foundation; you need to know who we are.” Our job is to fund those organizations. They give us legitimacy. We don’t give them legitimacy. This is not about our brand.

How do you answer a community organization when its leaders say, “We want to go in a different direction from your top-down mandate”?

DW: I ran a community organization and have been on the receiving end of top-down dictates. When I worked in Harlem, people said, “Here’s what we think you need.” That experience has informed my posture more than anything.

You have to listen. Our programs have to be informed by those affected and whom we seek to empower.

The foundation world is enraptured by metrics. How do you measure effectiveness?

DW: Many great movements and societal transformations would not have been achieved if we started with “Can we measure it?” Not all that needs to be done is ‘metricable.’ Putting everything through a standardized metrics approach would squelch innovation and new ideas.

But knowing what works is important and necessary. We’ve known situations where things that are not working still get funded and things that are working get underfunded. I’m sensitive to this issue of balance.

An example of how you address that balance?

DW: There’s thinking that says, with respect to black men and boys, single-sex education is better. I would like to know if this works. That takes a rigorously designed program to actually know. Here, I like metrics. If you tell me this is better, in terms of achievement and success, that’s where I want policy to be directed.

But who is to say that litigation and public interest law, which are having a hard time, should be defunded because a metric would tell us, oh, well, they’re not succeeding right now? That doesn’t mean we should stop funding public interest and legal work.

Where do arts and culture fit in the social justice agenda?

DW: There are aspects of cultural programming, like arts education, where you can measure impact on student achievement, particularly for low-income students.

But there is a more profound idea of understanding the human condition that comes from exploring our culture and all its forms and vibrancy…Engaging in ideas and self-examination is what great art does, whether it’s James Baldwin holding up the mirror to us about racism and homophobia, or Diego Rivera challenging our notions of economy and industry.

I know from my own experience that culture and the arts nurture the soul and allow us to have dignity. Inequality and poverty rob one, particularly children, of their dignity and aspirations. Culture encourages the imagination. My imagination saved my life; my ability to believe, beyond the experience I was having on any given day, in what the future could be.

Much ethnic media are dependent on advertising yet that for-profit model is being disrupted by the Internet. Can foundations keep this media vibrant?

DW: Ford can’t save media. We can engage the questions: what is the field going to look like or the future pipeline of journalists; who’s going to employ them; what business models are sustainable?

Look, I grew up on the Houston Forward Times newspaper in Houston, Texas, going to my grandmother’s. It’s still there, I was just in Houston. When I was in Harlem, I was in a story someone did on an organization I worked for. My mother gave it to my grandmother who said, “Well, that is great that he’s in the New York Times. But when is he going to be in Jet?” To her, when I was going to be in Jet or the Forward Times, that’s when she would know I had arrived.  That media is still so important.

Editor’s Note: In September, 2013, Darren Walker became the second African American and 10th president of the Ford Foundation, America’s second largest philanthropy organization with $500 million in annual giving. After a stint in international law and banking, Walker served as the COO of a non-profit agency in New York before moving to the foundation world, first arriving at the Rockefeller Foundation before being tapped to fill a vice president slot at Ford in 2010. He was interviewed in his New York office by Khalil Abdullah, national reporter for NAM.