Financial Insight: Politics and Government, Have They Both Gone Mad? 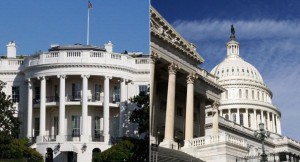 “The Congress and the White House are in deadlock…”  Photo credit:  Politico.com

It’s Earning Season and I’m getting the sense that members of the Doom and Gloom crowd aren’t as enthusiastic is some others may be.  Of the 334 companies that have reported to date for the fourth quarter (Q4 2012), 72% have reported earnings above estimates.  This percentage remains above the average of 69% recorded over the past four quarters.  After reporting a decline in earnings growth in Q3 (-1%), we are currently seeing companies reporting earnings growth of 3.0% for Q4.  So what does that intrinsically mean in the big picture?

The good news is that the nonpartisan Congressional Budget Office believes the U.S. budget deficit as a percentage of the economy will shrink in 2013 for the fourth consecutive year.  The estimated $845 billion deficit would come in at less than $1 trillion for the first time in five years, and symbolize 5.3% of GDP, approximately half of 2009’s numbers.  That’s outstanding news and it is a clear indicator of growth for the U.S. economy.  But wait for it…there is bad news.  Without (reasonable and necessary) tax and spending modifications, the CBO says that the total national debt will be at 77% of Gross Domestic Product in 10 years, largely because of escalating health-care costs and interest payments on federal debt.  And how do we achieve tax and spending reforms in our era of injudicious government?

That, unfortunately, depends upon the U.S. Congress, and, by the way, Congress is about to go on an extended “President’s Day Recess” starting Friday.  While some of our esteemed elected officials seem more than willing to allow the sequestration provisions to take effect, the Budget Control Act of 2011, created by these same congressional persons, will basically use a chainsaw instead of a scalpel to resolve some of our over the horizon fiscal issues.  What’s really very important to understand here is the automatic cuts will reduce expected economic growth by at least 0.7% according to the Congressional Budget Office.  That may not seem like much, but when you drill down into what will be most affected by this, 0.7% is very significant.  Per the Office of Management and Budget, the 2013 sequestration would impose cuts of 9.4% in nonexempt defense discretionary funding and 8.2% in nonexempt, nondefense discretionary funding.  A 2 % cut would hit Medicare providers, 7.6% would affect other nonexempt nondefense mandatory programs, and 10% would be applied to nonexempt defense mandatory programs.  Sequestration would emasculate investments vital to economic growth; compromise the safety and security of the American people; and wreak havoc on programs that benefit the middle-class, seniors and children.  And after 2013 what are we facing then?  The required defense funding cut of $54.7 billion in each year from 2014 through 2021 will require reductions in the annual statutory caps on defense funding that the Budget Control Act sets for each of those years if sequestration is triggered.  Queue the cheering section of the Doom and Gloom horde.

I remain optimistic.  We have been hearing about jobs, jobs, and jobs for years now; the economy is growing, and we are obviously in an expansion phase.  No, we’re not out of the fiscal depths to ensure rapid growth, but we are getting there.  Unfortunately, we have a government that appears to thrive on chaos.  24/7/365 it’s all you hear and see.  The Chaos Theory hypothesizes that everything that happens affects everything that happens afterwards.  With the blunt force of the Sequestration, it would be a good time to reexamine just what it is that our Government is trying to accomplish.  The Congress and the White House are in deadlock as Americans watch in disbelief, with Obama in campaign mode and Republicans scrambling for some iota of leverage.  James Madison, our fourth president and father of the constitution, must be rolling over in his grave.  I remain cautiously optimistic.