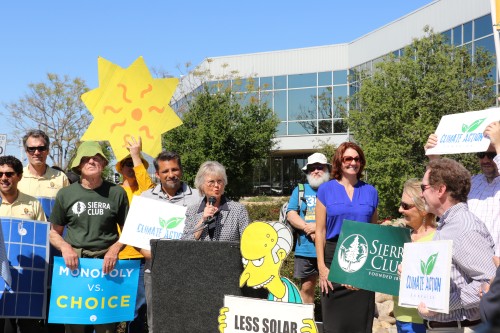 SAN DIEGO, Calif. (March 16, 2016) – A passionate crowd of over 150 local clean-energy advocates gathered at San Diego Gas & Electric’s Corporate Campus in Kearny Mesa today. The protest was in response to the investor-owned utility’s recent rebellion against its own watchdog, a move in which solar advocates say is to derail a competitive industry.

On January 28, after a 22-month proceeding, the California Public Utilities Commission made a final decision about the future of solar in California known as net metering 2.0. The decision was considered a compromise for the utilities and solar advocates. Unsatisfied with the January outcome, however, San Diego Gas & Electric (SDG&E) Pacific Gas and Electric and Southern California Edison filed to legally challenge the decision on March 7.

After reviewing a mountain of filings from the utilities and others, the Commission decided to firmly reject proposals from the utilities to replace net metering with complicated schemes that would have prevented most customers from going solar. While the January 28 decision makes significant changes to net metering, requiring customers to pay an upfront application fee, pay an ongoing monthly fee required by all customers and be subject to time-varying rates, SDG&E has again requested major changes that would put solar out of reach for a majority of homeowners.

“The desperate quest of the monopoly utilities to take away the freedom of families to become energy independent only proves the urgent need to break up the monopoly and provide permanent freedom of energy choice to all families and businesses,” said Nicole Capretz, executive director of the Climate Action Campaign. “It’s the American way and the quickest way to transition to a clean energy future.”

The City of San Diego has a Climate Action Plan goal of 100 percent renewable energy by 2035. This would make San Diego the largest city fully powered by renewable energy. The San Diego rooftop solar industry, which is second in the nation per capita, is currently providing a $1 billion economic benefit to San Diego County. That amount is slated to increase once the Climate Action Plan goes into effect, but would be extremely difficult to achieve if SDG&E’s requests are granted.

“Our local, state and national governments have sent a clear message that solar is here to stay but SDG&E refuses to accept these policy objectives and would rather cling on their antiquated fossil fuel business model,” said Daniel Sullivan, founder and president of Sullivan Solar Power, “I encourage all San Diegans, all Californians, to join us. Let’s leave fossil fuels and those who produce it in the past, and let’s move forward, united, with our eyes set on a clean energy economy, so that our children and our grandchildren will enjoy a better future.”

Other testimonials at the protest included emotional pleas for the Commission to take a stand and support solar for environmental, economic, social and health benefits.

“We’re here to call on the California Public Utilities Commission to stand by their decision to keep net metering in place so that other homeowners can put solar on their roof supporting healthy neighborhoods, the state’s climate goals and local jobs,” said Alby Quinlan, an Encinitas solar homeowner and member of SanDiego350.org.

The protest was co-organized by San Diego350.org, the Sierra Club, the Climate Action Campaign and the California Solar Energy Industries Association (CALSEIA).

“For my generation, a fossil fuel monopoly is a dinosaur that belongs in a museum,” said Alejandro Montes, Sierra Club leader and San Diego City College student. “We expect clean energy and a choice today.”

Pacific Gas & Electric and Southern California Edison also submitted rehearing requests on March 7. The California Public Utilities Commission has 120 days to respond to the utilities’ request for a rehearing and has yet to comment on this topic publicly.