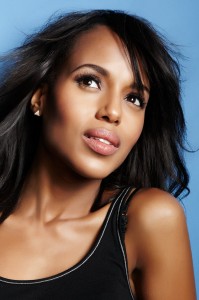 LOS ANGELES, CA (January 18, 2013) – Kerry Washington will be presented with the NAACP President’s Award at the 44th  NAACP IMAGE AWARDS, broadcast live from 8-10 p.m. ET (PT tape-delayed) on Feb. 1 on NBC, it was announced today by the NAACP.

“For the first time in 40 years, we have a black woman playing the leading role in a primetime drama on network television. Kerry Washington is a modern trailblazer,” states Jealous.  “Her talent and will have taken her to heights we have not seen in years. She extends the tradition of women like Ruby Dee, Cicily Tyson, and Lena Horne. Rather than seeing her professional success as cause for political silence, she has chosen to use it as a platform for social change. Her championing of the rights of women around the world, and her early work to campaign for President Barack Obama are examples of her willingness to be a politically active and risk-taking woman in real life even as she plays one on TV.”

NAACP award-winning actress, Kerry Washington, is a versatile and fearless actress with an impressive and diverse body of work.  With the critical and commercial success of her most recent projects (Django Unchained and ABC’s Scandal) garnering industry-wide acclaim, as well as her involvement with President Obama’s re-election campaign, Washington has proven herself to be an emerging power player in Hollywood as well as a social and political activist within the community.

Washington is an active member of the V-Counsel, an esteemed group of advisors to V-Day, the global movement to end violence against women and girls, and she serves on the board of Voices of a People’s History, a non-profit arts and education group.  She also sits on the Artist’s Committee for the largest national advocacy association for the arts, Americans For The Arts.  In 2008, Washington received several accolades including the Women’s Project Women of Achievement Award, the GWU Alumni Association’s Recent Alumni Achievement Award, and the Congressional Black Caucus Foundation Phoenix Award, for Washington’s commitment to social advocacy. In 2009, Washington received the US Conference of Mayors Artist-Citizen Award for public leadership in the arts.  That year she was also named a member of President Obama’s Committee for the Arts and Humanities, headed by First Lady Michelle Obama.

The NAACP Image Awards are being produced by Reginald Hudlin and Brad Lachman. Bill Bracken will serve as Supervising Producer and Byron Phillips as producer. The production team also includes Tony McCuin as director and Melanie Massie as the talent executive.  The live show will originate from The Shrine Auditorium in Los Angeles.

Presentation to Trailblazing Actress and Activist to be made during live broadcast on Feb. 1, 8-10 p.m. EST on NBC.