Selma, Scandal, How to Get Away with Murder, Blackish Among the 2015 NAACP Image Award Nominees

Viola Davis, NAACP Image Award nominee for her role as Analise Keating on ABC’s “How to Get Away With Murder.”

Without a doubt, Shonda Rhimes and ABC is having another great year!

Leading the pack of NAACP Image Award nominations in the television category,  her hugely popular TV shows, “Grey’s Anatomy” (ABC) “How to Get Away with Murder” (ABC) and “Scandal” (ABC), Rhimes and cast collectively are up for eleven nominations.

Among those nominated are the amazing Viola Davis who’s nominated for “Outstanding Actress in a Drama for her role as the brilliant professor, Analise Keating in “How To Get Away with Murder,” and her co-stars, Alfred Enoch and Aja Naomi King who portray her loyal law students.  Kerri Washington, who won last year, is nominated again for her role as Olivia Pope in Scandal.

Davis also garnered nominations for her roles in “The Disappearance of Eleanor Rigby” (The Weinstein Company) and “Get On Up” (Universal Pictures).

And not surprisingly, Chadwick Boseman who masterfully played James Brown in “Get On Up” (Universal) was nominated for Outstanding Actor in a motion picture. 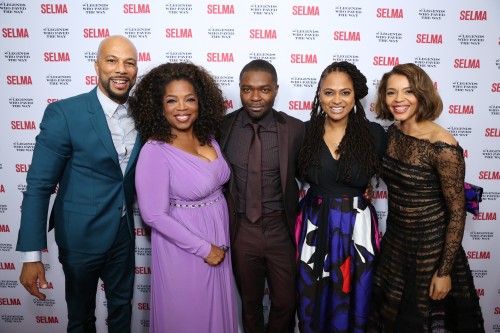 The nominations were announced this morning from the Paley Center for Media in Beverly Hills, CA. The categories and nominees were announced by Tracee Ellis Ross (Black-ish), Gina Rodriguez (Jane the Virgin), Jason George (Grey’s Anatomy), Aja Naomi King (How To Get Away With Murder), Alfred Enoch (How To Get Away With Murder), and Tessa Thompson (Dear White People).

Tracee Ellis Ross (`black-ish), was ecstatic for the  new series ‘black-ish’ being nominated in five categories.  Ellis-Ross along with her co-star Anthony Anderson were nominated for outstanding actress and actor in a comedy series.

The NAACP Image Awards celebrates the accomplishments of people of color in the fields of television, music, literature and film and also honors individuals or groups who promote social justice through creative endeavors.

Winners will be announced during the two-hour star-studded eventwhich will broadcast LIVE on TV ONE on Friday, February 6, 2015 at 9pm/8c as a two-hour special. A one-hour pre-show will air live from the red carpet at 8pm/7c.

“The Image Awards continues the NAACP’s quest to celebrate and uplift individuals who model principles of hard work, perseverance, and community empowerment. I believe this year’s nominees exemplify just that,” stated Roslyn M. Brock, Chairman of the NAACP National Board of Directors.

“We have enjoyed a great collaboration with TV One and look forward to working with them again this year to create a wonderful evening of entertainment”.

“It was an honor to be part of today’s announcement recognizing the outstanding artistic achievements by members of our community. The NAACP Image Awards is more than just a ceremony, but an institution for artists and social justice pioneers of color”, stated Cornell William

Brooks, President & CEO, NAACP. “As the Image Awards continues to grow and evolve, the principles of social justice remain at its core”.

For a complete list of the nominees visit:  http://www.naacpimageawards.net/nominees/