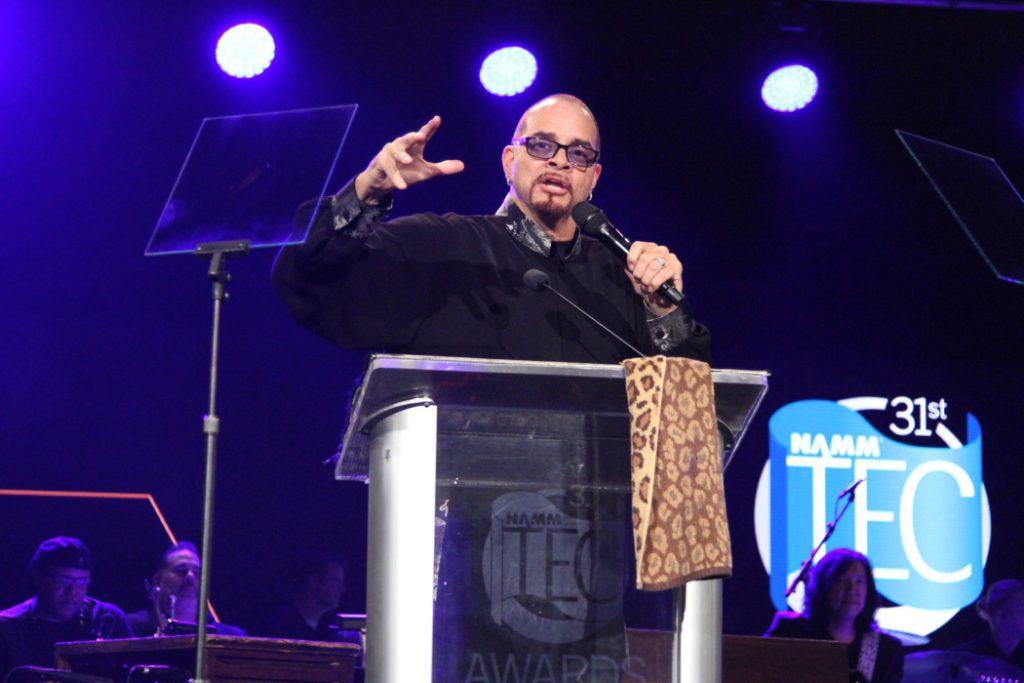 The NAMM Foundation has announced  nominees for its 32nd Annual NAMM Technical Excellence & Creativity Awards in the categories of Outstanding Technical and Creative Achievement. Stand-up comedian and actor Sinbad will return for his third straight year as host. The NAMM TEC Awards are bestowed annually in celebration of the pro audio community by recognizing the individuals, companies and technical innovations behind today’s sound recordings, live sound, films, television, and video games.

More than 900 products and projects were considered during the highly-competitive nomination process. This year’s Outstanding Technical Achievement Nominees were chosen across twenty-three categories and include selections in two new categories: Audio Education Technology and DJ Production Technology – Hardware/Software.

Represented in many of the nominations for the 2017 show are the creators of more compact and mobile products that reflect the demands of an increasing number of independent and home studio musicians.

Examples in the DJ world include American Audio’s VMS5 Controller, which is both portable and compact with an all-in-one Midi Controller (DJ Production Technology – Hardware/Software); double-nominee Moog Music for their Model 15 App – a bonus for on-the-road creativity as the first Moog modular synthesizer and synthesis educational tool created exclusively for iPad and other Apple® devices (Audio Apps & Hardware/Peripherals for Smartphones/Tablets); Blue Microphones’ Bottle Mic Locker that offers studio musicians the flexibility and option of layering tracks with different capsules to find the right sound (Microphones – Recording); the Korg Minilogue (Music Instrument Hardware), which is a 37 slim-key fully programmable analog polyphonic synthesizer, reflecting yet another innovative product that helps fuel the19.9% growth in total unit volume among analog synths in the last five years. Nominees will be recognized in an additional nineteen categories that range fromWireless Technology to Musical Instrument Amplification & Effects, Computer Audio Hardware and beyond.

“What makes all of the TEC Award nominees so special to us at NAMM is the fact that these results represent the voice of the professionals who are out in the field interfacing with the gear on a daily basis,” said Joe Lamond, President & CEO of NAMM. “And before we know it, we’ll all be together at the NAMM Show, where the TEC Awards represent the annual ‘family reunion’ of the world’s most technically-intuitive audio and recording inventors and developers. The incredible energy and passion these talented teams bring to our industry and to the world of music- making is simply priceless and it is gratifying to honor them for their contributions.”

Eight categories for Outstanding Creative Achievement represent household artists and projects that have long been embraced by the culture at large. They include multi-Platinum recordings by artists Adele (Adele Live 2016 for Tour & Event Sound Production) and Paul McCartney for the One on One Tour in the same category. “Downton Abbey” and “Game of Thrones” and others will battle it out for a Television Sound Productionaward. Geeks go head-to-head in the Film & Sound Production category, which includes the perennial hits “Star Trek Beyond” and “Star Wars: The Force Awakens” films, among three other nominated projects that fully immerse the listener in realistic sound effects. Singles Recording Production, Interactive Entertainment (a growing sector), Remote Production and Sound Design categories will also be awarded.

Prior to the show, a Les Paul honoree and Hall of Fame inductee will also be announced and will include musical luminaries who have exhibited excellence in the creative and technical music recording fields.

Voting will begin in November. In total, winners from 31 categories will be selected from the 179 nominees by industry professionals across major music, sound and game audio associations, along with pro audio-focused media groups.

The Saturday, January 21 event begins with a VIP-only reception at 6PM, followed by the awards ceremony at 7PM, held in the Hilton Anaheim Hotel’s Pacific Ballroom. Tickets can be purchased on site or in advance here for $50 (General Admission) or $175 (VIP). The show will be available via a live event web stream during the NAMM Show.