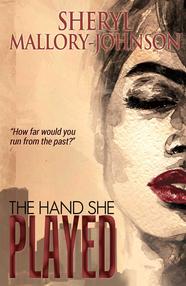 Author Sheryl Mallory-Johnson has a way of creating characters that connect with the reader in a familial way: The sister who acts like your mother, the mother who acts like your daughter, and the friend or neighbor who’s like a brother, but wants to be your lover, or vice versa.

The Chocolate Voice became fan’s of her writing after reading her last novel LOVE AND REGRETS. And, let’s just say, we’re hooked.

In her latest novel THE HAND SHE PLAYED (WanaSoma Books), the romantic storyteller takes us on a whirlwind journey involving a life of poverty and survival beginning on Detroit’s lower eastside. The story is centered around an unbreakable bond between identical twin sisters, Angie and Vangie Cooper. As different as night and day, what Angie lacks in confidence, a strong willed, determined and streetwise Vangie, makes up for it as her fierce protector. Hell bent on leaving a life behind dealing with shady characters and traumatic events, Vangie finds her way out of poverty doing whatever it takes by compulsively lying as a means to an end. Determined to build a new life, she’s introduced to a love she fights to hang onto as she finds herself trying to fit in by climbing the social ladder in a world of Black bourgeoisie, as an attempt to get as far away from her past as possible.

But, will her past catch up to her?

As the story unfolds, although strikingly different in personality, in similarity the twins are figuratively one in the same.

She even skillfully throws the reader a few words of wisdom on the law and the stock market.

When you get to the end, you’ll find that THE HAND SHE PLAYED is a book that deserves a sequel.