Herbert Siguenza’s one-man show, A Weekend With Pablo Picasso, was not what I expected, in a good way!

Truth be told, I was expecting a theatrical biography of Picasso, which would have been perfectly fine, but after seeing the production, I found the show to be very entertaining.

Presented by the San Diego Repertory Theatre, Herbert Siguenza, a founding member of Culture Clash, the groundbreaking Latino comedy troupe, stars in a one-man show as Pablo Picasso, one of the most influential artists in modern history. 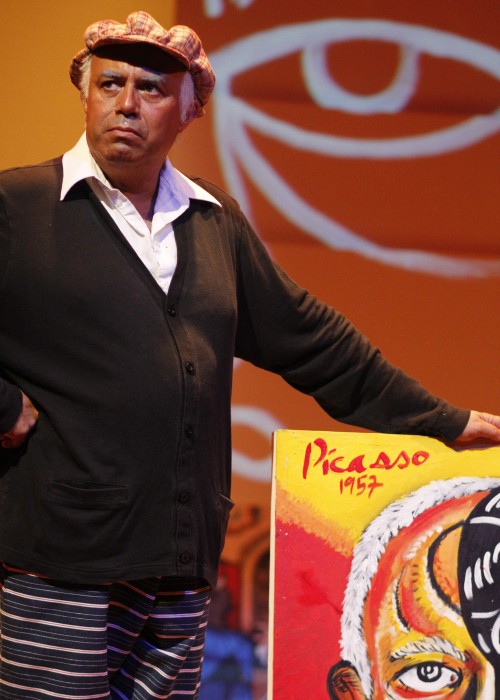 Directed by Todd Salovey, the production is set with Picasso living in France in 1957.

The first scene opens giving the audience, which he speaks to directly as a perceived group of art students, an intimate glimpse of an eccentric Picasso bathing in the bathtub. He begrudgingly welcomes them inside of his private studio and goes on to firmly say, “You can stay and watch me work but you must be quiet!”

The show really comes to life when Picasso receives an urgent request from an art dealer to get out six expensive paintings and three vases within one weekend.

Siguenza’s stellar performance as a whimsical 76-year-old artist, who is also a communist at work, amuses the crowd throughout the production. He comfortably struts around his studio in shorts while painting on canvas, inserting personal stories and political remarks.

We suggest you take the time to find out how the story unfolds and spend an unforgettable weekend with Pablo Picasso.

A Weekend with Pablo Picasso runs through Oct. 6 at the Lyceum Theatre at Horton Plaza, Downtown. $31-$58. sdrep.org