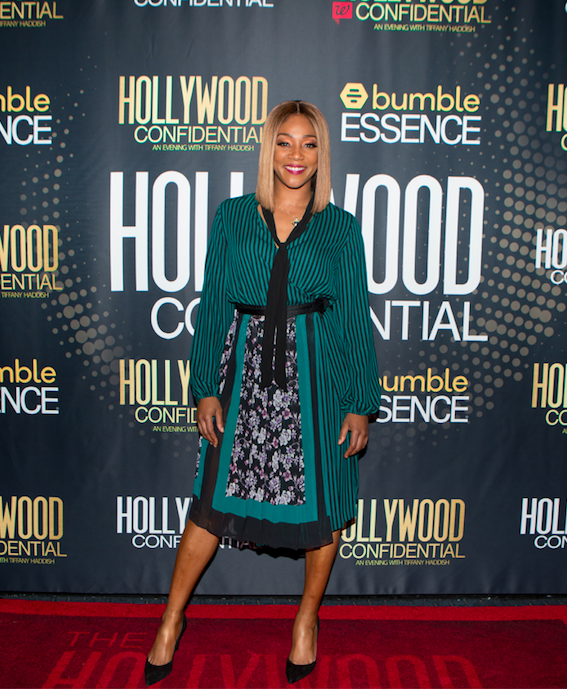 Congratulations are in order for Tiffany Haddish for receiving her very first Emmy nomination this morning for her work on Saturday Night Live!

The breakout star of the hit comedy “Girls Trip” has been on a roll since the film, and it doesn’t seem to be slowing down. Prior to receiving a Emmy nod today, the actress/comedian, received the Trailblazer Award at the ninth installment of Hollywood Confidential  on Friday, July 6, 2018 at the The Saban Theater in Beverly Hills, CA in partnership with Essence Magazine. Brand Maverick Entertainment (BME) president and event series creator, Steve Jones (Producer of OWN’s “Black Love,” “Motherly Love”) moderated a conversation with actress and comedian Haddish (“Night School”).

Jones shared, “…it is through Hollywood Confidential that I have come to learn that service breeds purpose. Purpose, and its discovery is why we are all here on earth. It is our job to look within, to listen, and to discern our heart’s song—allowing the lyric and melody to lead us into our God-given destinies…my #1 tip to the aspiring entertainer, you have the power to change the course of your life, simply by creating what you want to be a part of; manifest.”

We also have to thank and congratulate the actress who coined the phrase “She Ready” for the massive crowds (over 500k) who attended the 2018 Essence Festival.  As “they” say, everybody and their mama attended this years gathering of sisterhood, which many give the credit to Haddish, after watching her performance in the hit film.

Powered by Bumble and sponsored by Walgreens, the conversation with Haddish focused on her personal journey and becoming a breakout star, staying true to oneself while in pursuit of one’s career and the importance of mentorship within the entertainment industry.

Award-winning producer Mara Brock Akil (“Love Is__,” “Being Mary Jane,” “Girlfriends”) made a surprise appearance for a special moment to present the “Legend Award” to veteran producer Ralph Farquhar (“Moesha,” “The Parkers,” “Real Husbands of Hollywood”)—Farquhar has been a mentor for both Haddish and Akil throughout their careers.

Akil shared to Farquhar, “Thank you for changing my life, for seeing something in me. Thank you for creating a space that I could do what I do, so that I could have a dream realized. I know I’m not the only one so I’ll speak for everybody, there’s probably thousands of lives that you have touched.”