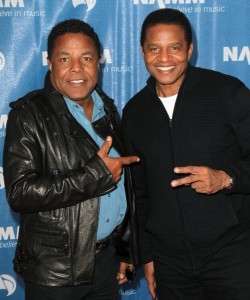 Tito and Jackie Jackson of the famous Jackson 5 and, brother’s of the late  legendary icon Michael Jackson, attended media day at annual The National Association of Music Merchants (NAMM). Tito a bass and electric guitar player is known for his love of blues music and, Jackie Jackson was known as the co-lead singer of the both the Jackson 5 and the Jacksons.

Also, in attendance was former NY Yankee standout and now a Grammy-nominated Latin jazz artist, Bernie Williams. Bernie,  pictured with NAMM President, Joe Lamont came together to discuss the importance of music education and the value in implementing arts programs into our school. Lamont reiterated that all the profits from the annual NAMM Show go towards improving music education programs. Williams will be playing on the Main Stage at 4 p.m. on Friday. 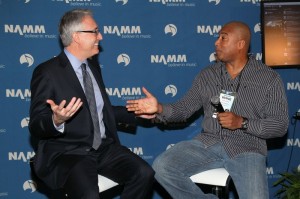 The 2013 NAMM Show, held this year at the Anaheim Convention center  gathers 95,000 members of the music product industry from around the world to preview new product debuts from thousands of brands across every category.