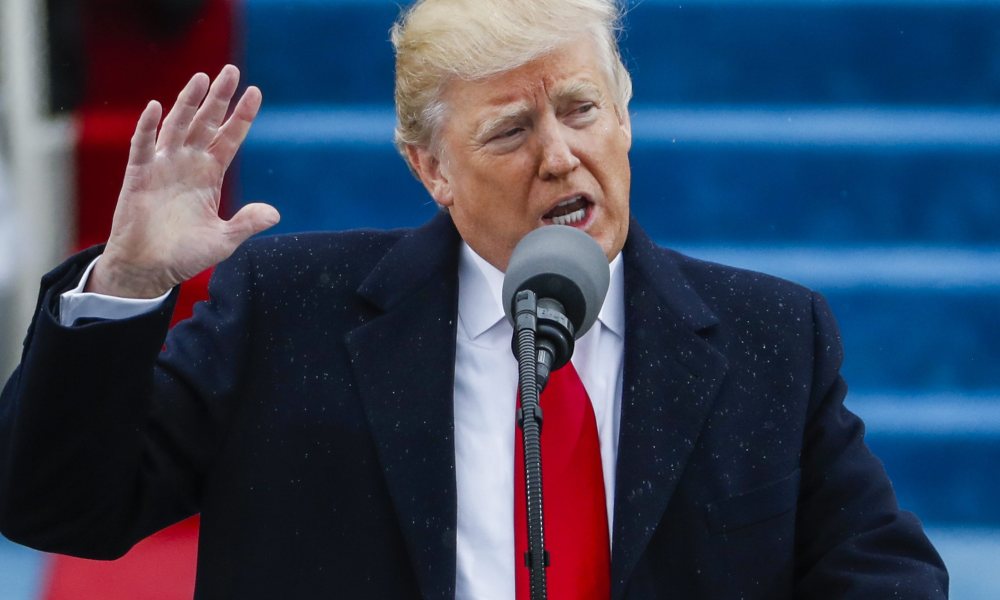 President Donald J. Trump delivers his Inaugural address after taking the oath of office as the 45th President of the United States in Washington, DC, January 20, 2017.

By law, and the machinations of the Electoral College, Donald Trump is the President of the United States. However, after listening to his angry, dark depiction of our citizenry and civic leaders, and the “carnage” delivered by the last 2 Presidents, Trump managed to ‘diss’ them both, while both gave him the honor of attending his inaugural speech. Trump’s message to me is that he is not ‘my’ President either, nor does he intend to be.

With a totally dower, pessimistic, smile less, demeanor you would think our Nation was financially, morally, and spiritually corrupt only awaiting Trump’s “salvation”.

The Dow has virtually tripled since Obama took office, the unemployment rates has diminished by nearly two-thirds and is actually lower in California than the national average at 5.1%, and LA County at 5.0%–considered by most modern economists to be near practical ‘full employment.’

The US is virtually independent with regards to its oil and natural gas production, and oil prices remain historically low and likely to stay low as idled domestic production is set to rebound should prices increase moderately higher from present levels, regardless of what OPEC decides to do in limiting their production to the rest of the world.

Compared to the rest of the planet including the UK, the EC, China, and most of SE Asia, the US is doing “swimmingly” well (you can look up that adjective on your own).

Trump comes into his Presidency with the lowest level of popularity in modern times, and has begun his term by alienating the whole majority of individual citizens who did not actually vote for him (plus another 3 million on top of that), while continuing to play up to the mere 27% of the total eligible voters who could have voted in the 2016 election.

Admittedly, it is embarrassing that 90 million eligible voters did not vote at all in the 2016 election year. Many were disenfranchised by restrictive voter ID laws in mostly Southern States, but courts have not foreseen to fix this abridgment to voter rights.  It is safe to say, Trump did not remotely enthuse the whole electorate, only “his” fraction of our Nation’s citizens.  This is reason enough to be disillusioned about the likelihood of any bi-partisan consensus in dealing with the ‘real’ issues facing our Nation domestically, with regards to foreign diplomacy, and the global issues of trade and climate change. If you believe his points in his first speech as President, Trump is more intent on blowing up everything, rather than resolving the issues that require consensus.

A bull in a china shop is apropos description of the new Prez, but that assumes a certain innocence of the bull. A more appropriate expression is the one I learned from my Chilean business associates that I repeat regularly, “come un mono con una navaja”—like a monkey with a knife.  The monkey, so equipped, is far more dangerous that any bull.  So is the analogy to the monkey.