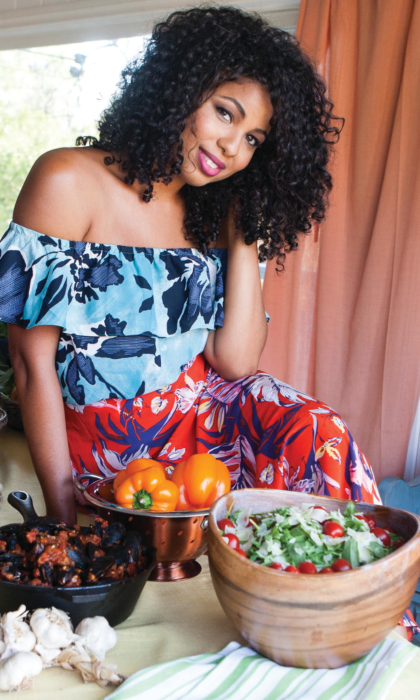 Jazz Smollett team up with brother Jake on Living by Design.

SILVER SPRING, MD) – November 20, 2018 – This January, TV One will launch CLEO TV, a new aspirational lifestyle and entertainment cable network targeting Millennial and Gen X women of color.  Derived from the name Cleopatra, one of the most powerful, trendsetting, rule-breaking and iconic women in history, CLEO TV will offer quality content that defies negative and cultural stereotypes of today’s modern women. The network promises a unique and diverse lineup of short and long-form programming that reflects the multifaceted interests of this generation.  With a bold, fearless and fresh take, CLEO TV gives multicultural young women a destination for content centered around travel, home design, relationships, finances, cooking, talk shows, movies, docu-series, sitcoms and much more.

“We’re at a pivotal moment in history where women are making a huge impact in our society and culture, especially women of color,” said Michelle Rice, TV One’s General Manager, who was responsible for shepherding the development of the new network. “CLEO TV will offer a diverse mix of lifestyle and entertainment content through the unique lens of Millennial and young Gen X women of color, an audience segment currently underserved. CLEO TV will leverage the comprehensive media platform of our parent company Urban One, Inc. which includes digital, television and radio divisions that will each play an integral role in bringing this new network to the marketplace. We appreciate the support of our inaugural launch partner Comcast, as well as as CURLS Beauty Brands for this tremendous opportunity to elevate new voices in our industry.”

CLEO TV’s original programming lineup for First Quarter 2019 includes two new series. NEW SOUL KITCHEN is the ultimate cooking show featuring culinary superstars Chef Jernard Wells and vegan chef Porsche Thomas delivering soul food recipes with a healthy twist. Harlem based Chef JJ Johnson, one of the culinary world’s most sought after stars, brings his delicious delights to CLEO TV with celebrity friends and influencers on JUST EATS WITH CHEF JJ. Launching in Second Quarter 2019 is the series LIVING BY DESIGN WITH JAKE AND JAZZ, hosted by brother/sister duo Jake and Jazz Smollett, who team up to transform the living, work and play spaces of millennial families. During each episode, Jake and Jazz will enter the home of a millennial, help them turn their design dreams into reality, then conclude with a delicious recipe curated by our hosts to celebrate their redesigned space. CLEO TV also has two travel series in development that are slated to launch in Third Quarter 2019 — a travel and culture guide for Black millennials and a series centered on adventure travel.

CLEO TV’S acquired, scripted digital series offerings include EVERYTHING I DID WRONG IN MY 20’S, which tracks the journey of 35-year-old Stephanie who’s in search of happiness and determined to learn from the mistakes of her past.  THE UNWRITTEN RULES is a hilarious series based on the book “40 Hours and an Unwritten Rule” that chronicles young, opinionated Racey as she arrives at her new job only to discover she is the sole Black employee. Additional programs include popular web series that reflect the dynamic experiences of Black millennials, from adulthood drama to dating struggles.

“The best part about CLEO TV is that program formats will be both a mixture of old and new school, and viewers will find shows that have a modern twist,” said Robyn Green Arrington, TV One’s Vice President of Original Programming and Production. “CLEO TV will bring to the forefront short-form and acquired programs that have only been in the digital space, which will give them more broad exposure and attract a new generation of viewers to the network. It will provide lifestyle, empowerment and entertainment lineups that mothers and daughters can watch together.”

In addition to its original programs and acquired series, CLEO TV’s programming slate will include daily talk show SISTER CIRCLE LIVE and syndicated sitcoms that appeal to young women of color such as “Girlfriends” and “Eve.” CLEO TV will also feature some of TV One’s breakout original movies, such as BOBBI KRISTINA, JEAN OF THE JONESESand LOVE UNDER NEW MANAGEMENT: THE MIKI HOWARD STORY.