The look in her eyes says it all. 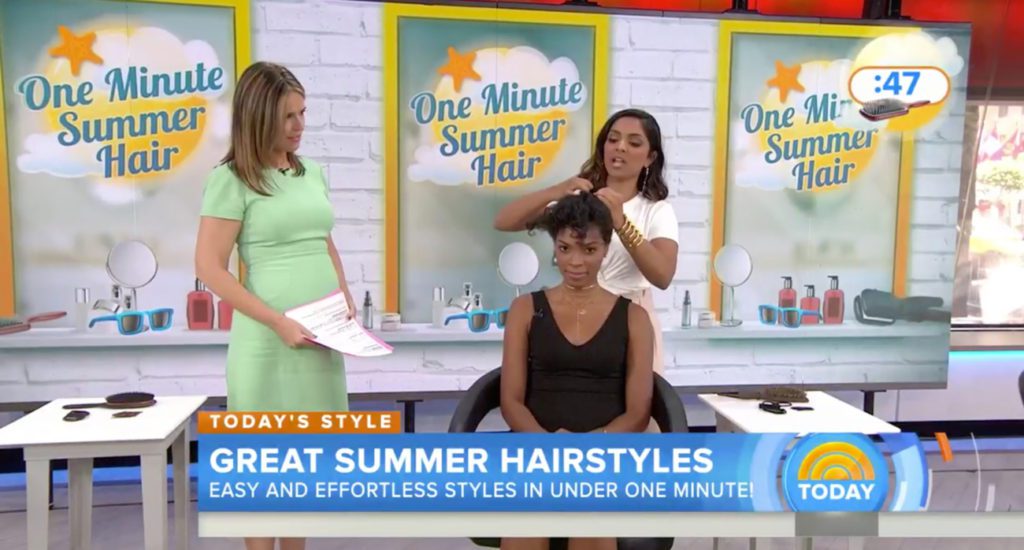 That is the look of, “I know this girl doesn’t know what she’s doing, so should I sit here and let her ruin my hair? Or should I teach her about black hair?”

So by now you’ve all heard about the Today Show fiasco last week, where Resident Style Expert Deepica Mutyala, ruined the hair of two models, Pham AND Malyia. Of course no one was that mad at Pham’s hairstyle but twitter went IN on Malyia’s hair. As Deepika grabbed Malyia’s hair she said, “It’s all about that ‘effortless’ look.” Ya’ll she was just twisting and fluffing, swirling and poofing, and basically improvised a hairstyle on the fly.

I have been in Malyia’s shoes. I don’t know one black woman who hasn’t been in that chair, feeling a disaster as it’s happening. It seems like black hair is one of those never ending topics—whether it’s cultural appropriation, to relaxing it, to straightening it, to going natural, and finally to just doing both something and nothing to it because you feel like you have to, and that’s literally what Deepica did.

Deepica has since apologized for the whole thing, but as someone who is going natural, I laughed but it does still sting a little bit. There have been too many times when I’ve encountered those free makeover experiences at department stores, and there’s usually a preppy girl who’s overly enthusiastic about touching black hair. It usually consists of some mismatched make-up, some weird smelling mousse that they put in your hair, and finally they spin you around to get a final look in the mirror and you look a mess, but they lie to you because they know they messed up. I expect this from an amateur. I expect this from a clerk at a department store who will probably never even pursue a career in cosmetics, or hair care, let alone black hair care. I do NOT expect this from a “Style Expert”.

I know that black hair can be temperamental—my edges are rebellious and my kitchen is leading the revolution. But seriously, it’s ok to want to be culturally inclusive, but I just ask that hair stylists everywhere who claim to be experts—I ask that they do their research first, that’s it.