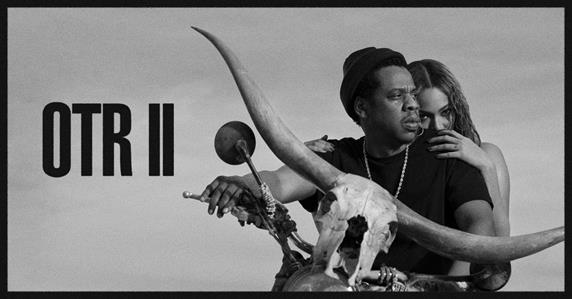 Beyonce and Jay-Z made it official today: the powerhouse couple and musicmakers’ OTR II stadium tour kicks off its North American leg July 25 in Cleveland. The tour arrives on the West coast September 19 at University of Phoenix Stadium, in Phoenix, AZ,  Rose Bowl on September 22, in Los Angeles, CA, September 27, at SDCCU Stadium and on September 29, Levi Stadium in Santa Clara.

The new trek is a followup to their hugely successful On The Run 2014 joint tour, which grossed nearly $100 million and turned into an HBO special.

In the summer of 2014, Beyoncé and JAY-Z performed six weeks of sold out stadium dates across North America with their highly anticipated ON THE RUN tour. The tour closed with two international dates in Paris, France that were filmed for an HBO special that received an Emmy nomination.

The tour officially kicks off June 6 in the UK with 15 dates across the European continent before heading to the U.S. for 21 scheduled dates.