Black Stuntmen (BSA) Filming Documentary on Hollywood Behind the Scenes 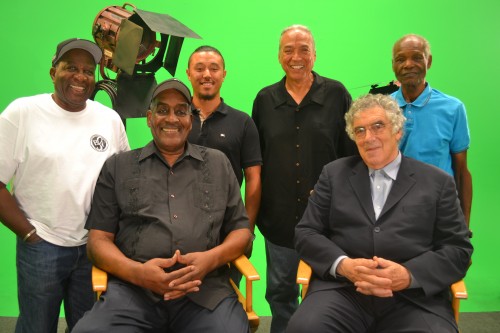 (Los Angeles, CA) On Friday, October 3, members of the Black Stuntmen’s Association came together for a mini reunion at Source Film Studio’s in Los Angeles.

Willie Harris, BSA President, along with colleague and business partner Alex Brown, Tony Brubaker, Phyllis Ellis, Henry Kingi, Joe Tilque, Oscar-Nominated actor, Elliot Gould and Academy-Award winning actor, Louis Gossett, Jr., were among those who came in support of and to interview on film, for an upcoming documentary on the life of being a Black stuntmen in Hollywood.

The basis for creating a documentary is for the group to share with the world their contributions and struggles in the entertainment industry.

One of the many struggles that the group encountered during the sixties was, instead of casting black stuntmen, Hollywood directors hired white males and painted their faces black to perform stunts.  Therefore, the  birth of the organization was formed out of a necessity to break down barriers, which ultimately resulted in paving the way for many of today’s Black entertainers, in front of and behind the camera.

Inside of the warm studio, old colleagues, friends and a few family members laughed and joked about old times. The group, some of who hadn’t seen each other in years, had the opportunity to get caught up with life, and to reminisce about how the Black Stuntmen’s organization came about.

Legendary actor Louis Gossett, Jr., interviewed with stuntman Tony Brubaker, whom he met while on the set of “Young Rebels.” Both men exchanged unbelievable stories describing the fight for racial equality in one of  the most life-threatening professions. 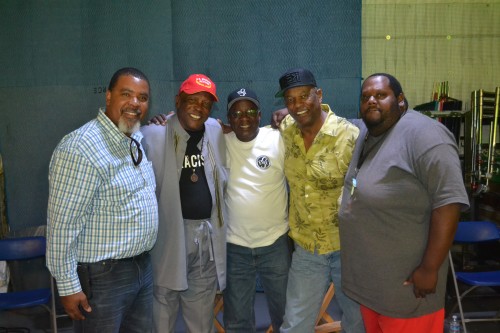 Healthy and fit at age 78, Gossett, began acting at age 17.  When asked about his many dangerous encounters while filming, he revealed that he felt most physically threatened on the set of “Jaws 3D.”

In addition to Gossett’s extensive list of film credits, he is also the founder of the Eracism, a foundation focusing on creating a society where racism cannot exist.

Standing 6’4” tall Brubaker, grew up around horses talked about his experience performing cowboy stunts for actor Otis Young in the 1969, ABC western “The Outcasts.” He shared that in film, cowboys were most often portrayed as White, when in reality, throughout the West there were large numbers of Black cowboys.

Willie Harris, President and one the founding members of the Black Stuntmen’s organization, the spokesperson for the group, shared how his random meeting with Oscar-nominated actor Elliot Gould  is what forever changed his life, leading to a career as a stuntman.

Harris, who comes from a family of sharecroppers in Mississippi, started out playing professional basketball, however, due to a knee injury he was forced to give up the sport.

After deciding to move his family out west to California, Harris, found himself unable to find employment and had fallen on hard times.

“A friend of mine came by the house and asked me to give him a ride from Compton to Hollywood, which I did. I didn’t know Hollywood, and I got lost trying to get back home. So I stopped to ask somebody for directions, and they were shooting a movie called, “Bob, Carol, Ted and Alice” starring Elliott Gould, Natalie Wood and Dyan Cannon. I was watching them film, and this guy walks up to me and asks me my name and how tall was I? I answered Willie, and I am 6’8”. I then asked him, what’s your name?” He says, “Elliot Gould. At that time, I didn’t know who Elliot Gould was.”

One thing led to another, and Gould explained to Harris that there are many things to do in the movie business besides acting, such as–being an extra, or perhaps a stuntman and other behind the scenes work.

Gould, 76, who has worked in the industry since he was 8, ultimately helped Harris get into the union which cost $300.00 at the time. He even gave him some money to buy a decent meal and a little extra to feed his family.

“Instinctively I got a good feeling about Willie,” said Gould, who didn’t quite recall the monetary portion of the meeting. Willie on the other hand remembered it very well, and was grateful. 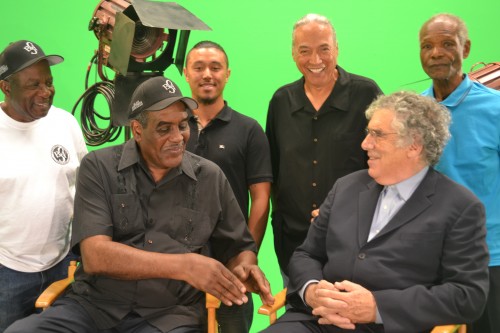 Harris and Gould have remain connected through the years and so, when Harris invited the actor to come down and interview for the project, Gould says, “I’m pretty busy Willie but, are you going to be there?”  Willie says, “Yes I’ll be there.” Gould says, “Well, then I’ll be there too.”

Gould, was one of the last to show up for the taping, was actually earlier than scheduled.  When the esteemed actor entered the room, Harris, who hadn’t seen the actor in over forty years, anxiously walked over to greet the man, he calls a lifelong friend who he credits for getting him into the doors of Hollywood, without kicking it down, allowing for diversity in front of and behind the scenes.

For more information on the Black Stuntmen’s Association visit: www.blackstuntmensassociation.com