It’s an interesting time to be a blerd (black nerd) in America.

I’m not a blerd although I think I may be transitioning into one thanks to Marvel’s Black Panther, Luke Cage and many more. Comic Con was this past weekend, and from an outsider with no comic book knowledge, I enjoyed following the insanely funny and incredibly intense cosplay going on – as I always do. However, one thing was different this year – and that was the growing number of black characters—black LEAD characters. Black superheroes confirmed for blockbuster movies & TV shows. And with that, came the growing number of blerds being able to dress up as people who actually look like them. Representation matters!

The timing and growing representation of superheroes of color couldn’t have come at a more opportune time, especially after the highly publicized recent killings of black men, we need to see black superheroes on the big screen now more than ever. The Marvel Cinematic Universe has been considerably progressive about showcasing black people with superpowers – and I am so glad that we are now working to see them in lead roles, with title characters.

From my perspective, I’ve seen black characters, and black superheroes but they were always the sidekick, or the funny best friend – no shade to Falcon or War Machine from Captain America but I wanted to see someone who looked like me as the lead, and now we have it. Insert Luke Cage and of course Black Panther. What I love most about these two is that they are completely different characters. One is the king of Wakanda, a fictional country in Africa, and the other is a wrongly imprisoned man from Harlem. The importance of multidimensional characters is a necessity for progress and accurate representation in Hollywood. Aside from that, the movie and the series are going to be incredible either way, I mean you can’t have all that melanin and not be poppin, am I right?! 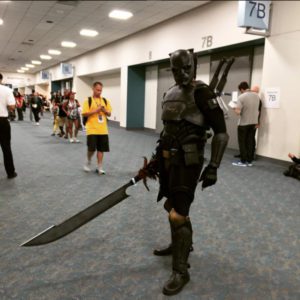 Also, look at this man dressed as T’Challa from Black Panther, the irony is, I don’t even think he’s black, but you know what? Who cares? The point is that representation matters and that superheroes can come in all different shapes, sizes, colors, and genders. I’m excited for the women of Black Panther also – Danai Gurira and Lupita Nyong’o are probably going to steal the glory from Michael B. Jordan and Chadwick Boseman, because the black girl magic is real ya’ll.

Which brings me to my next point, can we just get a clap for Marvel’s new Iron Man, Riri Williams?! She’s 15, a student at M.I.T. and per Marvel, she will “explode out of Civil War II and into the boots of the Armored Avenger.” after taking over for Tony Stark. The teenaged superhero isn’t quite ready for the big screen, seeing as how she’s only appeared in one comic book BUT she will emerge as the new Iron Man in the fall. I can’t wait until Marvel makes HER story into a movie too. 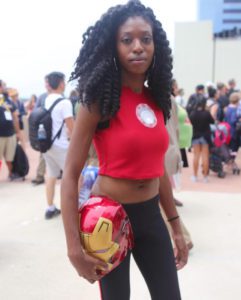 Look at this girl dressed as Riri! Her character is already impacting female blerds, and you know what? This time next year, you just might see ME at Comic Con dressed as Riri….maybe.

I know that we’ve got a long way to go – but we can at least admit that this is huge progress. I’m also confident that Black Panther and Luke Cage will open many eyes and doors with regards to diversity within Hollywood and the comic book world.