Interview: Actress/Activist, Sheryl Lee Ralph. Right Where She Should Be! 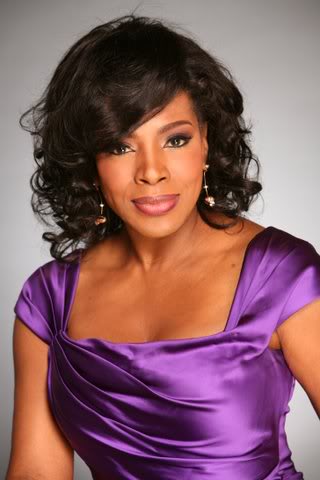 For those of us who follow award-winning actress Sheryl Lee Ralph on Twitter, she hooked us at the phrase she uses to describe herself, “Right where I should be!” Spoken like a true DIVA. Based on her impressive body of work clearly, Ralph is exactly where she should be.

In the half hour episode, the versatile entertainer shares her stellar accomplishments including her Tony-nominated role as Deena Jones in the original Broadway musical Dream Girls, and her role as Dee Mitchell on the popular series Moesha.

Life After will also reveal Ralph as an activist, a true champion who’s passionately committed to a cause that she holds near and dear to her heart, the DIVAS Simply Singing Foundation, a nonprofit musical organization dedicated to addressing the challenges of HIV/AIDS.

The Chocolate Voice caught up with Sheryl Lee Ralph, wife of Pennsylvania State Senator, Vincent Hughes and mother of two, in between rehearsal for a delightful and very candid chocolate chat.

TCV: We heard that you were the first woman to graduate from Rutgers University at the age of 19. That is just amazing!

SR: That is what I try to tell college students now.  I headed off to college to do one thing, graduate.  My main focus was trying to learn and understand how college works.  When I was on my way to college, my father said to me, “You can do whatever you want with your life, after you graduate from college.”  That inspired me to get in, and get out.  I learned that it was all a game of numbers.  How many credits could you take, and how high of a GPA could you earn? Once I learned that after the first semester, I was full steam ahead.  My father was so thrilled not to have to pay for a fourth year of college for me.

TCV: When you started college, you were planning on being a doctor.

SR: Yes, I was.  I was a premed student.  I come from that American, West-Indian Union that says, “Every family has got a doctor and a lawyer.” My mom told me, “If you can’t do that, then marry one.” I ended up doing neither of those things and just playing doctors and lawyers.

TCV: How did your transition from being a pre-med student to entering the performing arts take place?

SR: It happened quickly.  It was that first semester when I was in organic chemistry.  Between organic chemistry and philosophy, my head was spinning.   I just knew those two things were not for me.  In organic chemistry, as quickly as they gave me my scalpel, I gave it right back. I said, “Oh no!”  Then I tried Constitutional Law, and I said, “Oh dear God no!” The teacher just droned on, and her voice sounded like nails on a chalkboard. I just couldn’t take it. It was awful. I got lost one day, and it was just like a movie. I got out of my Constitutional Law class, it was raining, and I was crying because I knew I had to call my mother and tell her that I was not going to be a doctor or a lawyer, and to ask her to please continue to support me through college. I was lost on this campus, but suddenly the rain cleared up, the sun came out, and I was standing in front of a theatre with a sign that said, “Auditions.”  I walked in, and my life changed from that moment.  That’s the truth.

TCV: Sheryl, you have had many milestones in your life.  Which milestone are you most proud of?

SR: Being able to be a mother to my children, a wife to my husband, and being able to carry on in this industry, especially when I am able to redefine myself in an industry where people are always telling you that you’re too young, too old, too Black, or not Black enough.  I am proud that I have been able to overcome those obstacles and still be “in the game.”

TCV: IMDB quoted you as saying, “Theatre is in my blood. When I began as an actress, you weren’t really acting unless you were doing theatre.” How so? Are there any other thespians in your family?

SR: It’s just who I am.  My brother is an actor and comedian, and he does a lot of voiceover work.  My son, even though he tries not to do it, is very much into the performing arts. He is a film major at Drexel University.  My daughter cannot help being a great selfie photographer. She has turned that into a great art.  It’s all there, you can’t fight it.

TCV: You are also the creator of the Jamarican Film Festival.

TCV: That is wonderful!  You also have another foundation, Divas Simply Singing.

SR: Yes, this year is our twenty-third year, making us the longest-running musical AIDS benefit.  It is especially amazing when you consider that AIDS has been known in America for over thirty years, and people still do not want to talk about it.  They want to raise awareness, but they do not want to say the word AIDS out loud for fear that people will not want to hear about it.  I say that you must directly address what you are trying to teach people, or they will not properly learn what you are trying to tell them.  I have to say, doing this work came at a great cost. It was one of those things where I had to make a decision to just do right.  I remember people telling me that I was a fool and that people would not like me.  I remember somebody saying to me, “It’s not as if you’re a big star, you’re not Elizabeth Taylor.” As if you had to be Elizabeth Taylor to dare to care.  I also remember receiving a letter from a church telling me that God would find no favor in me because I was doing work with “those people.”  It is very hard to stand by what you believe, which can only be vindicated by time.

TCV: How challenging was it for you to transition between theatre acting, television, film, and writing books?

SR: For me, acting is like art, a craft. I always had incredible teachers. When I was doing Dream Girls on Broadway, I was continuing to study, and I was taking a class instructed by Uta Hagen, an incredible actress, author, and drama teacher. I will never forget her looking at me and talking about my talent, and what it would take to transition. She was always very clear that acting on stage is one thing, and acting on film is another thing. I remember that lesson so well because it was all about the subtleties. When you’re acting on film, there’s a subtlety in your acting, and sometimes actors don’t learn these lessons. I was able to learn these lessons, and it was good for me.

TCV: You also played a great role as Dee Mitchell on Moesha. What are your thoughts on that role?

SR: What was great about Moesha was that it was generational, the kind of show that a family could watch, and everybody could get something out of.  That is one of the things I find to be a great plus about Instant Mom, the show I am currently working on. I am working with an amazing group of young people on the cast, and again, it is a generational show.  Everybody can watch this and come away with something.

TCV: The show Life After, which highlights your career, is great! What made you decide to share your story?

SR: I am thrilled that TV One thought enough of me to highlight my work. I am so happy with how everything has turned out, and my best days are still ahead of me.

Life After returns for a fifth season with back-to-back new episodes on TV One Wednesday, September 11, at 8 p.m. ET and 8:30 p.m. ET.