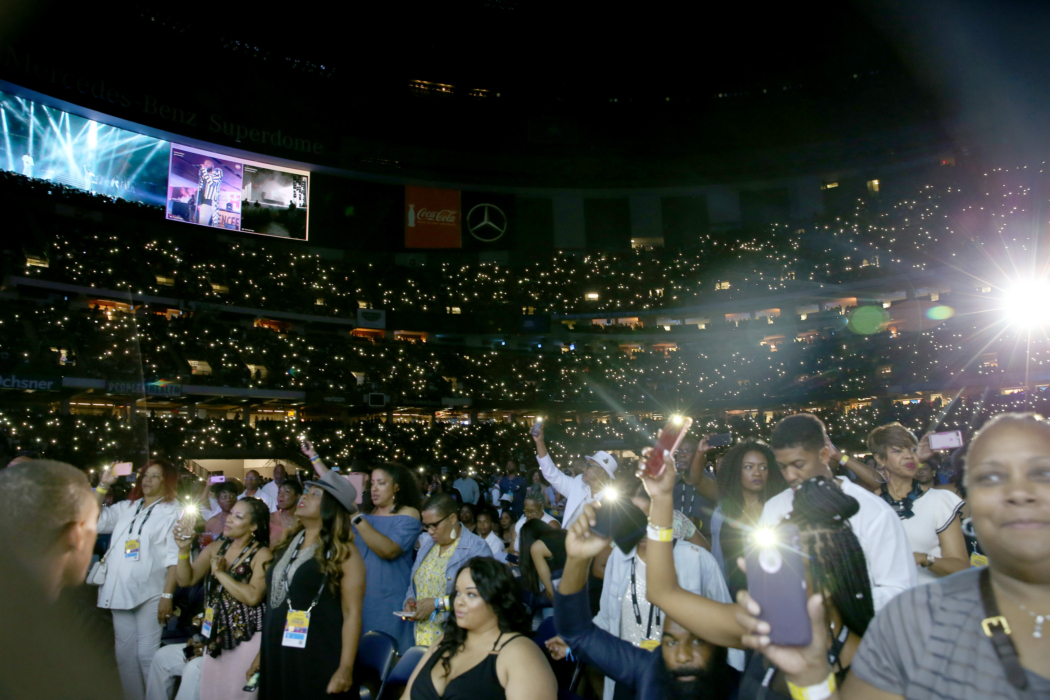 OVER HALF A MILLION ATTENDEES CONVENE FOR THE

July 9, 2018 (New York, NY) – The 2018 ESSENCE Festival® presented by Coca-Cola® attracted more than 510,0000 attendees to New Orleans this Fourth of July weekend, marking one of the largest gatherings in the event’s 24-year history.   For the first time ever, all three nights of the ESSENCE Festival concert series at the Louisiana Superdome sold out.  The extraordinary turnout underscores ESSENCE’s engagement of Black women around community, culture and content – which was brought to life in innovative ways at the annual celebration.

“This extraordinary gathering of nearly half a million attendees–on the eve of the ESSENCE Festival’s 25th anniversary–speaks to the unmatched convening power of our culture,” said Michelle Ebanks, President, Essence Communications.  “As one of the country’s largest curated live experiences, the ESSENCE Festival engages Black women globally—through a truly unique celebration of culture, connection to community and access to content that inspires and empowers.”

The annual 4-day Festival, which took place July 5-8, features entertainment, empowerment, and cultural experiences during the day and a state-of-the-art concert series with the world’s best performers each night to comprise a one-of-a-kind curated content experience:

Over 100 performing artists across the Superdome and the Ernest N. Morial Convention Center. Many of the biggest names in the entertainment industry including Janet Jackson, Mary J. Blige, Queen Latifah, Snoop Dogg, The Roots, Erykah Badu, Jill Scott, Miguel and others performed at the event’s nighttime concerts and dozens of others across ESSENCE’s Center Stage and 10thAnniversary All-Star Gospel Tribute honoring Dottie Peoples.

Expanded consumer Expos such as the ‘Beauty Carnival” and ‘Entertainment All-Access’ drew crowds of thousands each day to the Ernest N. Morial Convention Center.   Elevated VIP events and programs for attendees included the launch of the ‘ESSENCE House’ at the Ace Hotel, as well as the debut of the ‘E-Suite’ with exclusive access to career and business programming.

Community give-back and volunteerism at the Festival’s traditional ‘Day of Service’ focused on the theme “Adopt-a-Neighborhood – Central City” to encompass youth center beautification projects, as well as empowerment and entrepreneurship workshops for women & girls.  ESSSENCE ‘Day of Service’ also presented the inaugural Excellence Awards honoring local change-agents in the community.

For a full recap of all the exciting moments from the 2018 ESSENCE Festival, visit ESSENCE.com.