Living in a world where consistent images and celebrations of cultural pride and understanding exist during February—Black History Month, yet today, a good majority of African Americans still struggle with the gravity of cultural identity.

In Tanya Barfield’s two actor stage play ‘BLUE DOOR,’ which made its debut, January 29, at the Award-winning MOXIE Theatre in San Diego, the playwright’s focus is on one mans struggle with the legacy of an oppressive society and how it has affected his identity, living in a European dominated culture.

Sephus’ enormous strength and humility adds to the role as the successful, smart, tenured math professor, who happens to be married to a white woman named Kimberly, who’s divorcing him for distancing himself from his culture by refusing to attend the Million Man March.

Lewis, a complex character created by society, has successfully assimilated into the dominant culture and has egregiously erased his past life of oppression.

In the first scene, Lewis sits alone in silence in a bedroom, where he appears to reflect on his recent life occurrences. This is when he tells the audience about his wife’s decision to leave him.  Then, a series of sequential visits in the form of three relatives from his ancestry, Simon, Rex and Jesse all played extraordinarily by an exceptionally talented young actor, Cortez L. Johnson.

For most of the play, directed by Delicia Turner Sonnenberg, Lewis struggles with his conscious as his ancestors testimonies began to take center stage as real life humans.

Thanks to MOXIE for creating a detailed program outlining 400 years of African American History.

Starting off with the first story of exploitation and violence endured by great-grandfather Simon, who was born into slavery in 1844. Simon learned to read and write from the slave master who sexually abused him. Next, there was Jesse, (Simon’s son) born in 1865. Jesse served a decade in prison for refusing to leave a worship service at a white church. He was ultimately murdered for trying to vote. And, there was Charles, born in 1908 the father of Rex (1940) and Lewis. Lewis’ birth was apparently somewhere there after.  Charles became an abusive alcoholic out of despair of living in an oppressive society. 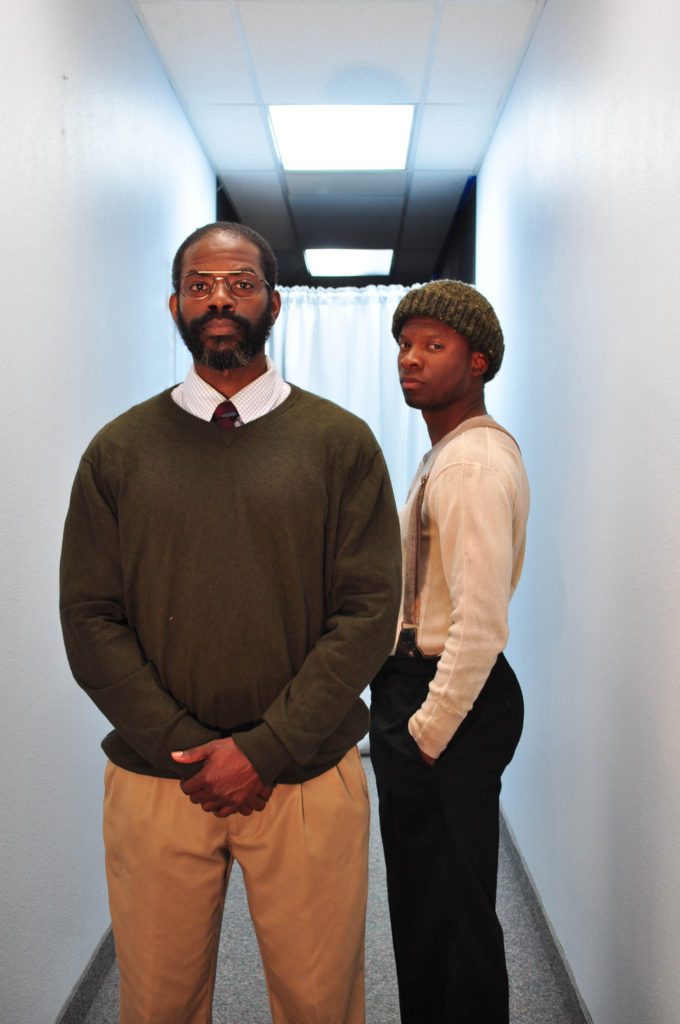 Johnson’s stellar performance playing three generations, infused with sudden bursts of comedy mixed in with humanity, made the dark horror’s of the past a lot easier to get through.

Overall, the playwright deals with themes reflecting on a term coined by W.E.B. Du Bois (The Souls of Black Folk), “Double Consciousness,” in simpler terms referring to the challenges of living with the legacy of an oppressive society, while struggling to live in a white-dominated culture.

In one scene Lewis reflects on his own encounter with more subtle racism, at a faculty cocktail party where he’s the only black person, and a white women is fixated on the size of his hands as if he’s naturally a threat because he’s black.

There’s somewhat of an uneasiness watching ‘BLUE DOOR,’ end as a distraught Lewis struggles to understand his identity. He says,

It’s evident after the Sunday matinee sell out performance of ‘BLUE DOOR,’ an honest and open conversation on race relations and cultural identity is necessary. Nearly all of the diverse audience members stayed after the show for a Q & A talk back moderated by Professor Adisa A. Alkebulan, African Studies from SDSU and Professor T. Ford, Cross Cultural Studies, Grossmont College.