What do you get when you mix hard work, dedication and a few fearless women wanting to make a change in their community?

The answer is the San Diego Delta Foundation, an organization well known in the community for creating the Leadership Development Intern Program. The program is geared toward young African-American females in grades ten through twelve and provides academic enrichment, leadership training, mentoring and experiences to strengthen personal growth and development.

For the past fourteen years, the program has awarded over $300,000 dollars in scholarships, witnessed 100 girls graduate and go on to college, and it continues to create priceless and invaluable experiences for young African American girls across San Diego.

As its fifteenth year anniversary approaches, the organization is planning more surprises – powerful speeches, breathtaking performances all in honor of celebrating black excellence at the annual Rites of Passage Ceremony where the girls are given their wings to go out in the community and become productive citizens.

But let’s start from the beginning –in fact, the program started with just nine Deltas on the planning committee. Founding member Jacqueline Jackson says,

Jackson, who was a new Delta at the time, said that the members of organization had knowledge about her background in non-profit management, and recruited her to start the process of forming the program. “I was excited about the potential of establishing the program, and embraced the challenge.” She recalls. Together, the determined committee members  (Jacqueline Jackson, Mildred Neal, Dr. Constance Carroll, Marion Lane, Joyce Kercheval, Aerika Jacobs, Karen Hodge, Danielle Cooper and Janice Robinson) started the program – and the rest is history.

Jackson served as the first president of the San Diego Delta Foundation, which was founded in 1999 and later passed the baton to Mildred Neal who was the founding board vice president who worked alongside Jackson, to write and develop the curriculum for the intern program, which graduated its first class in 2002.

Over the past fourteen years, the program has seen a tremendous amount of growth – but has not gone without any obstacles. In fact, Neal says that it has been challenging to get some to commit three full years to the rigorous curriculum. She says,  “We explain to the girls upfront that it’s tough.  It’s tough because we’re helping them, while they balance other priorities in their lives, with continuing high school, preparing for college and going on to become leaders and productive citizens.”

Over the course of the program, the interns are paired up with a professional woman in the community, who is connected to the career path of their choice.

Their entrepreneurial skills are strengthened through selling advertising for the program book, and they are able to see their profits accumulate through scholarship money, a computer and a printer. Through participating in hands on career, social and cultural experiences, the young women also form a strong sisterhood of their own.

Jackson says that the program continues to achieve what the planning committee originally envisioned, which was to focus on leadership development, while preserving the heritage and cultural traditions. “We want the girls to feel proud of their heritage and culture no matter how high they climb the ladder of success.  We also want our girls to be prepared to conduct board meetings and network confidently.”

Neal explains that a highlight for the girls is the growth of their self-realization and confidence. As sophomores some start off as shy and when they become juniors, the light bulb goes off as they begin to experience the benefits of being apart of the program. When they are seniors, they finally get the full picture of the impact of the program and are more prepared and poised as they graduate.

When asked what she attributes to the success of it, Neal instantly gave praise to the committed board members who work incredibly hard to provide resources, time and support to the program.

She adds, “We are also very appreciative to our corporate sponsors and the San Diego community for embracing and supporting the program for the past fourteen years.

With the guidance of these accomplished role models, many young women have gained access to leadership opportunities through mentorships, participated in motivational and educational workshops, seminars, social events and engaged in community service projects.

Current president Cynthia James-Price, who has been with the foundation for twelve years, also acts at the chair of the program. James-Price is proud to report that the foundation now has a Legacy Fund where graduates who have benefitted from the program can make contributions as well.

James-Price shares that the focus of the Intern Program this year is Transformative Leadership which the Interns applied what they’ve learned in the program and beyond. Each Intern was asked to identify a young  lady at school, church, or in their family that they could mentor as a way of impacting not only the girls in the program but in our community. Race Awareness and Resilience was included to ensure that the  girls are culturally aware of what is happening in our society as it relates to racial issues that impact their lives as African American females.

This crucial piece of the program is in alignment with the Foundation’s vision of “Empowered Families, Strong Community.”

At this years Rites of Passage Ceremony, there are a total of 19 Interns in the program. Five of the young ladies are graduating seniors. During the program, the Interns will showcase all that they have learned since entering, from arts & culture – including a Waltz and an African dance, choreographed by Delta member and mentor, Vera Mooring, to professional development  – including a panel style interview with educational highlights, to the ending ceremony – where the girls are presented with their scholarship rewards.

Adding confirmation about how the parents and Interns value the program,  Neal proudly reports that LDIP has had 5 sets of sisters graduate from the program, all who have graduated from college.

In the current program, there are 2 sisters, 1 who has graduated and another is currently in her junior year in high school.

Members of the San Diego Alumnae chapter and the San Diego community are invited to join in to commemorate the milestone, at the Annual Rites of Passage Ceremony held on Sunday, March 6, 2016 – we hope to see you there.

To learn more about the San Diego Delta Foundation visit: 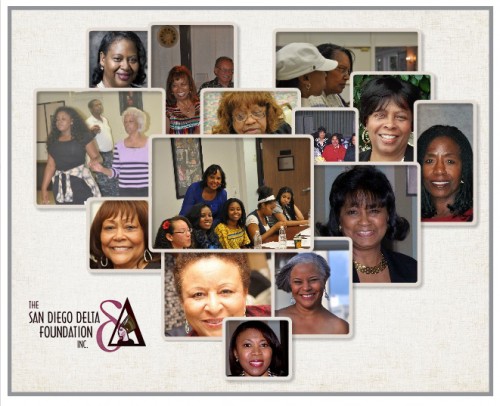