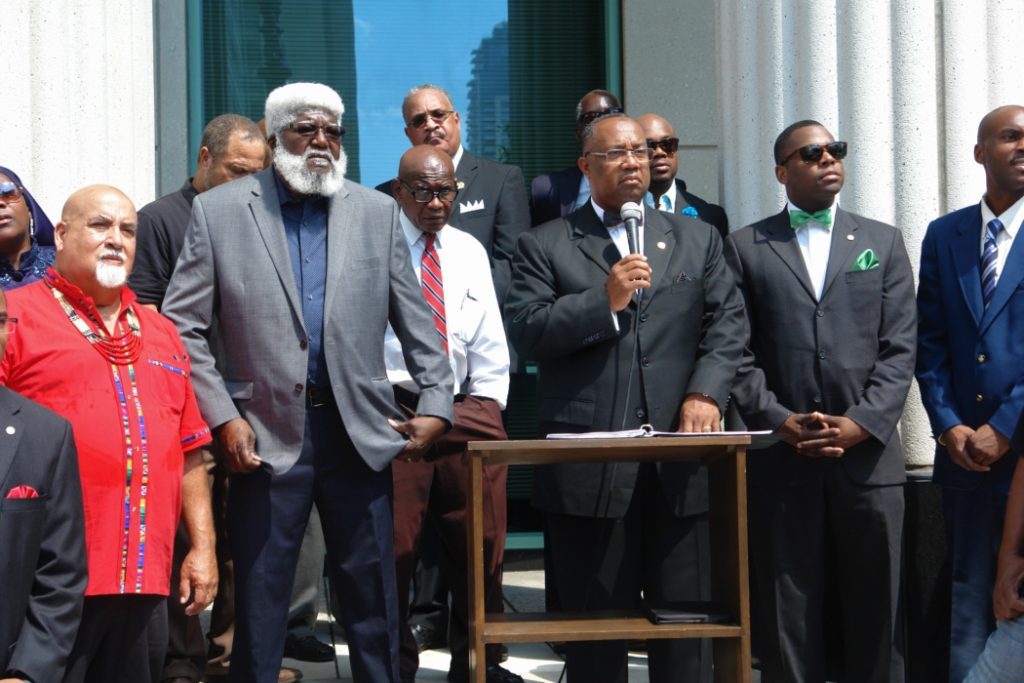 Student Minister Hugh Muhammad, Local Representative of The Honorable Minister Louis Farrakhan, held a press conference yesterday morning, September 7, at the Hall of Justice steps, located at at 330 W. Broadway in San Diego, to refute the designation of Muhammad Mosque No. 8 and the Nation of Islam as a “hate group” by Southern Poverty Law  Center, as reported in recent media coverage.

“The recently published article in the San Diego Union Tribune, on August 22, 2017, is false and has no basis in fact or law. This article in injurious, and it misrepresents the service we have provided to the citizens of San Diego, and the goodwill we have fostered in this city for many years.”

He lists that he and other staff members has sat on local boards that include:  Police Chief, District Attorney, County Probation advisory groups, and has been actively engaged in civic, business, educational,  and religious coalition that include cross cultural and ethnically diverse membership.

“The work we have been blessed to do in this city is well known. To label us with groups such as the Ku Klux Klan, Neo-Nazis, and other white supremacists, who have a record of hate and violence is defamatory, and completely unjustified.” Says Student Minister Muhammad.

San Diego holds the distinction of being the first mosque established west of the Mississippi in the early 1940’s.  The Nation of Islam is on record to have the reputation for reducing crime, reforming individuals, and reforming families.

Among those in attendance at the press conference was, Darnisha Hunter, Community Representative District 4, who stated on her Facebook page:

“Today the COMMUNITY came together in a big way to support Minister Hugh Mohammad and the WONDERFUL work he and Mosque 8 has done for the COMMUNITIES of San Diego. I was proud to NOT only see the Fourth District present but people that, don’t live in the Fourth District nor, look like me present. People shared about how those post prison males and females have pride about themselves and jobs. How the Mosque feed, protects the community, and service the homeless.”